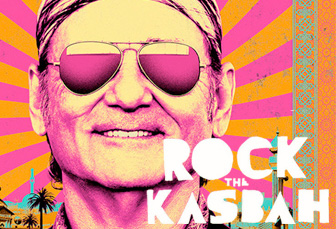 “Rock The Kasbah” is a real disappointment. I thought we were headed somewhere good after the opening scenes in which Bill Murray, as a down-on-his-luck music manager, takes client Zooey Deschanel to Afghanistan for a USO tour. There’s some real potential there. The problem is that Deschanel’s character freaks out on the first night in Kabul and leaves, never to be heard from again. End of potentially interesting movie.

From there, Murray — who now has no money or passport — gets involved with Bruce Willis as a mercenary soldier and two arms traders (Danny McBride and Scott Caan) with no scruples but lots of munitions to sell. All three of them are right out of the Cliched Characters handbook, as is Kate Hudson as the obligatory hooker-with-a-heart-of-gold. She’s essentially Penny Lane from “Almost Famous,” grown up and turning tricks in a double-wide trailer in the middle of Kabul.

All of that is just prelude to the final third of the movie, in which Murray is enlisted to deliver some of those arms to a Pashtun village a few hours from Kabul — a plot device that serves only to get him to a cave where he discovers a young woman singing while watching “Afghan Star” (a real TV show a la “American Idol”). He convinces her to leave the cave and go on the actual show, with his managerial assistance, despite the fact that Afghanistan’s oppressive society bans women from singing in public, let alone on TV. This part of the movie is based on the true story of Latifia Azizi, who was 17 when she went on “Afghan Star” in January, 2013, sending shock waves across the country. That’s an interesting tale to tell, but “Rock The Kasbah” muddies it with all of the preliminaries.

The movie’s a real disappointment, especially since it’s directed by Barry Levinson, whose filmography includes such classics as “Diner,” “Tin Men,” “The Natural,” “Young Sherlock Holmes,” “Good Morning Vietnam,” “Rain Man,” “Avalon,” “Bugsy,” “Wag The Dog,” and “Bandits.” Unfortunately, he hasn’t made anything good since 2001, and “Rock The Kasbah” doesn’t break the losing streak. I give it 3 out of 10.