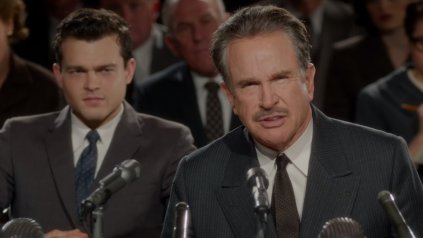 Warren Beatty knows how to make movies. From “Bonnie and Clyde” to “Shampoo” to “Heaven Can Wait” to “Reds” to “Bugsy,” he proved his abilities as an actor, director, producer, and writer. Of course, he also stumbled with “Ishtar,” “Love Affair,” and “Bulworth,” but no one hits a home run every time.

Now he’s back with the first movie in which he’s appeared in 15 years and directed in 18 years, “Rules Don’t Apply.” It’s another telling of part of the life of Howard Hughes — which was already done so well by Martin Scorcese, Leonardo DiCaprio, and the Oscar-winning Cate Blanchett in 2004’s “The Aviator.” There’s also the Hughes-adjacent classic 1980’s “Melvin and Howard,” with Paul LeMat, Mary Steenburgen, and Jason Robards.

The Hughes legend still looms large in Hollywood because he was such a big part of that town for several decades, producing classics like the original “Scarface” and “The Front Page,” and later owning the RKO movie studio. He was simultaneously a big shot in the aviation industry, a defense contractor, and a notorious eccentric.

Beatty plays Hughes during this period, yet the movie centers more on a young woman named Marla Mabrey (Lily Collins), who was brought to Hollywood by Hughes along with two dozen other aspiring actresses. Like the others, Hughes sets Mabrey up in her own bungalow, promising her a screen test. Mabrey’s mother (Annette Bening) comes along, but leaves in frustration when it remains unclear exactly what her daughter’s deal with Hughes is going to be.

Meanwhile, Hughes assigns one of his drivers, Frank Forbes, to chauffeur Mabrey around town. He’s played by Alden Ehrenreich, who I first noticed last year in “Hail, Caesar!” Ehrenreich’s star has been on the rise since then — he’s been signed to play young Han Solo in one of the upcoming “Star Wars” prequels.

Mabrey and Forbes take an instant liking to each other, but in sexually repressive 1958, their relationship remains chaste while their chemistry makes for interesting repartee. Besides, Forbes is forbidden by Hughes to date any of his “contract girls,” a fact he’s reminded of constantly by Levar Mathis (Matthew Broderick), another driver who’s also a close confidant of Hughes.

Then there’s Beatty’s portrayal of Hughes himself. Many of his scenes are shot in dark rooms, where light and shadow give him a deceptive curtain of secrecy. As Hughes becomes more eccentric — he was more than your average OCD germaphobe — and refuses to be around most people, he relies more and more on Forbes and Mathis, even as he keeps his business associates at bay. It’s all played very strangely because that’s the kind of guy Hughes was, but Beatty’s version comes off more as a straight-up weirdo with a litany of odd demands.

One directing choice of Beatty’s that I found odd was the constant use of smash-cuts. There are a large number of scenes that last just a few seconds before we go somewhere else abruptly. It’s jarring, but I guess that’s what you get when you need four editors to cut a movie (which also lists 18 producers in the credits!).

“Rules Don’t Apply” isn’t nearly as good as “The Aviator,” and I don’t think we really needed another telling of the Howard Hughes story, but it’s fine as passing entertainment. In the Warren Beatty filmography, it’s way better than “Ishtar” and “Bulworth,” but not anywhere near the greatness of his earlier work. I give it a 6.5 out of 10.