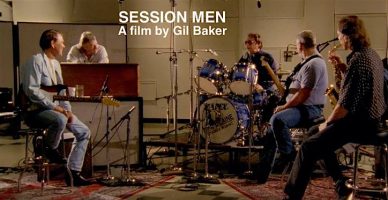 I have written enthusiastically about music documentaries like “The Wrecking Crew,” “Standing In The Shadows Of Motown,” and “20 Feet From Stardom,” which told the stories of the people whose names you didn’t know while they were working behind the stars and scenes.

Add “Session Men” to that roster. Gil Baker, an acoustic guitarist and studio musician, had access to many studio pros who helped create music that’s been part of the American soundtrack over the last 50 years.

Unlike their predecessors in the 40s and 50s who showed up, read the sheet music, and played what they were told to play, the new breed of studio musicians were required to contribute their expertise to songs that were created in the studio on the fly. Even if they’d been given charts, it wouldn’t have helped, because many of them couldn’t read music — like Reggie Young, who played on more than a hundred top forty hits. They played together so often and for so long, they knew when someone else was going to do a certain thing and could change what they were doing to match it.

Despite helping to create tunes that went on to sell more than a billion dollars worth of records, many of these musicians still feel under-compensated. The artist, writer, producer, and publisher all get royalties, but not the session musicians, even though they often came up with licks and other parts in the moment, or arranged pieces of the tune. Former members of the Memphis Horns and American Sound were often paid scale, less than $100, to play on a song.

My favorite story in the documentary is told by some of the players in Muscle Shoals. It’s the tale of Howie McDonald, a teenager who showed up at the studio door and asked one of the musicians how to get a gig playing on a record. The musician invited him in to watch them record a demo of “Old Time Rock and Roll,” then asked Howie if he wanted to join in. Excitedly, Howie got his guitar out of the car his parents were sitting in — with the motor running — brought it in and not only got to play along with the pros, he ended up on the record!

In addition to The Wrecking Crew (including the late Glen Campbell and Hal Blaine) and the Muscle Shoals Rhythm Section, Baker gathered members of The Section, LA-based players who worked with singer-songwriters like James Taylor, Carole King, Warren Zevon, and Linda Ronstadt. He had Will Lee (of Paul Shaffer’s CBS Orchestra on David Letterman’s shows) show how James Jamerson of Motown’s Funk Brothers created different bass lines for versions of “I Heard It Through The Grapevine” by Marvin Gaye and then Gladys Knight. And there are members of Nashville’s A Team, who played on hundreds upon hundreds of country hits.

Baker made “Session Men” five years ago, but to my knowledge, it never made it to movie theaters or TV screens. Fortunately, the movie is posted in pieces on this YouTube page. It’s a fascinating peek into an unseen world of musical magic.