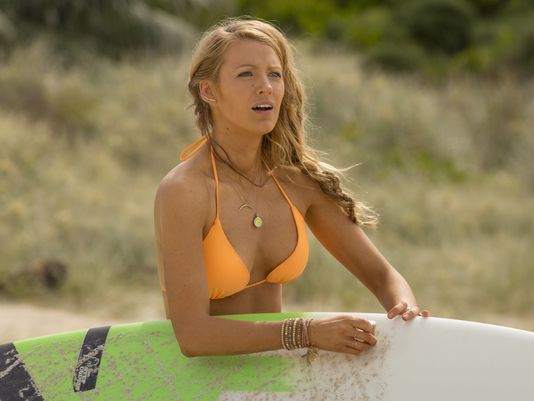 It has been 41 years since “Jaws” scared people out of the ocean and became the first summer blockbuster. Since then, there have been a few other shark-attack movies (including three lame “Jaws” sequels), but none of them have been worth your time — until “The Shallows.”

It stars Blake Lively as Nancy, a woman who goes to a very secluded beach in Mexico to surf. The only other humans she meets in the water are two young guys who explain the geography of the surroundings. The three of them ride some big waves for awhile before the men head in and call it a day, but Nancy wants to get one more good wave.

Once they’re gone, she’s completely alone, or thinks she is until a great white shark makes it presence known by knocking her off her board and sinking its teeth into her leg. She gets away, but the battle is on, and Nancy has to figure out a way to get out of there without being eaten by the giant killing machine. She climbs up onto one of the rocks protruding from the water, but she knows that when the tide comes in, that rock will become submerged again, exposing her to the shark.

What makes this different from “Jaws” is that Spielberg’s classic had a lot of setup before Roy Scheider, Richard Dreyfuss, and Robert Shaw took on the shark in deep ocean waters (they really needed a bigger boat). In “The Shallows,” Nancy is only 200 yards from shore and alone. That means Lively has virtually no supporting cast, but she goes a very good job carrying the bulk of the movie. The direction by Jaume Collet-Serra keeps us focused on her point of view as she deals with this life-threatening situation.

My only real complaint about “The Shallows” is that, while in the jungle on the way to the very secluded beach, and then on the sand before she gets in the water, Nancy has no trouble getting a perfect cell phone signal. She even makes a video call to her sister. I can’t do that from some corners of my own house, but it’s become standard procedure in movies and television shows for characters to never have that problem (even in elevators and tunnels). It’s disappointing because the rest of the movie is rooted in the reality of Nancy’s story.

“The Shallows” runs a tight 85 minutes, and though it won’t have anywhere near the impact of “Jaws,” it will make a lot of beachgoers think twice before diving into the waves this summer.

Note: At the screening I attended, some parents brought children under 10 years old, probably thinking they were going to see “Finding Dory.” But this water adventure is far too scary — there are at least two moments that made all of us jump out of our seats — for kids that age, who are probably still having nightmares about it. There’s a reason it’s rated PG-13.