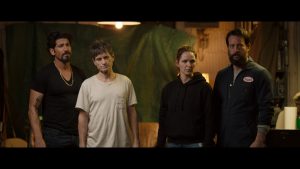 For its first hour, “Small Engine Repair” seems like a clinic in toxic masculinity. It’s the story of three lifelong friends from Manchester, New Hampshire — Frank (John Pollono), Packie (Shea Whigham), and Swaino (Jon Bernthal) — all of whom come with deep South Boston accents. These are blue collar guys who don’t hesitate to smack each other around verbally or sometimes physically. They’re the kind of guys who, when they go into a bar, have about a 93% chance of getting into a fight with other patrons before they leave.

As the movie begins, Frank has just been released from prison for some unknown crime. When he gets home, he’s greeted by his 17-year-old daughter, Crystal (Ciara Bravo), who he’s raised himself and means everything to him. Packie and Swaino are close to her, too. As for Frank’s ex-wife Karen (Jordan Spiro), she shows up every once in a while to give as good as she gets from the guys.

Then, an hour in, something happens involving a new character, Chad, an entitled college jock whose presence becomes the focus of the remaining 40 minutes. I won’t give anything away about him or why he shows up, except to say that things take a turn I did not see coming, ramping up the tension considerably.

“Small Engine Repair” started as a play written by Pollono more than a decade ago and first produced in Los Angeles in 2011, where it won several awards with Pollono and Bernthal in the original cast. It then moved to Off-Broadway in 2013. When that run ended, Pollono started working on the movie script, which opens up the stage version quite a bit and introduces more female characters in its first act. It was finally filmed in 2019 and was supposed to premiere at the SXSW festival in 2020, but it was cancelled due to the pandemic.

At the time, Amazon had a deal to take many of the movies that had been slated for SXSW and stream them on its Prime Video platform. But Pollono and Bernthal refused, insisting the movie be released into theaters. That’s finally happening today, but I think they made a mistake, since this isn’t exactly the kind of movie that people show up in droves to see these days. It would have reached a much bigger audience on Prime Video.

That’s a shame, because it’s awfully good, although about 15 of those first 60 minutes could have been cut in order to get to the plot twist sooner. After all, the stage version ran a mere 70 minutes. As the director, Pollono sets the right tone and gets just the right intensity out of his entire cast.