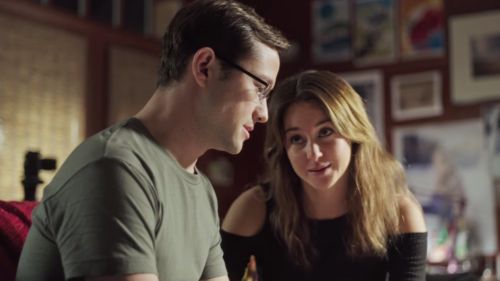 As a writer, director, and public personality, Oliver Stone has a reputation for conspiracy theories, so the tale of a government worker who worries he’s being spied on because he knows some secrets seems like it’s right in his wheelhouse. The difference between Stone’s earlier work (particularly “JFK”) and “Snowden,” is that this one’s about a real person, Edward Snowden, the whistleblower who told the world that the NSA and CIA were listening in on everyone’s phone conversations, emails, texts, etc.

Joseph Gordon-Levitt is excellent as Snowden. He clearly studied his subject to master his voice and speaking style. I was impressed with Gordon-Levitt in the Phillippe Petit bio-drama “The Walk,” and he’s just as good as Snowden. The movie tells Snowden’s story over nine years, 2004-2013, from his volunteering for the Army to his developing leg problems that kept him out of the armed forces to him getting a job with the CIA to his discovery that the agency was gathering a lot more info than the public knew. You learn that he was a conservative who was inspired by the 9/11 attacks to serve his country.

Shailene Woodley is very good as Lindsay Mills, his girlfriend (I think she’ll be nominated for an Oscar for supporting actress), who falls for him despite their political differences. She’s a liberal who’s not sure what he does for a living until she traces one of his emailed messages to her to figure out where it came from. When she confronts him about working for the CIA, he says, “You know how to run an IP trace?” For him, that’s a heartfelt expression of love and respect and they become a serious couple.

“Snowden” bounces back and forth between his years at the CIA and NSA to his 2013 meeting in a Hong Kong hotel room with documentarian Laura Poitras (Melissa Leo) and investigative reporters Glenn Greenwald (Zachary Quinto) and Ewen McAskill (Tom Wilkinson). All three of them are very good in their roles, as is Nicholas Cage in a small part as an early mentor to Snowden.

Stone shows us how Snowden’s distaste for the government’s data-gathering grows. He is shocked to see Director of National Intelligence James Clapper lie to Congress, answering “no” when Oregon Senator Ron Wyden asks “Does the NSA collect any type of data at all on millions or hundreds of millions of Americans?” (Clapper was never prosecuted for lying under oath). Snowden is also so disturbed to learn that the NSA can turn on your laptop camera and microphone to record you anywhere that he puts a piece of tape over his so that no one can watch Lindsay and him at home (I’ve done the same).

What happens in that Hong Kong hotel room before Snowden leaves and ends up exiled in Russia was covered by Poitras’ “Citizenfour,” which won the 2014 Oscar for Best Documentary). If you haven’t seen that, see this. If you did, see this anyway, as “Snowden” fills in more of the story from outside the Hong Kong hotel room. It’s also Oliver Stone’s best film in at least 20 years.

Coincidental with the release of “Snowden” are some legal appeals to try to get President Obama to pardon him, but that’s not going to happen — nor will he get that relief from whoever the next president is, since both Clinton and Trump have a different view of Snowden than the ACLU and I do. I consider him a hero for revealing details of an unconstitutional invasion of everyone’s privacy — both in the US and globally. I don’t fall for the “we have to keep you safe” defense as an excuse for violating our rights. Nevertheless, it doesn’t seem like Edward Snowden will be returning to the USA anytime soon.