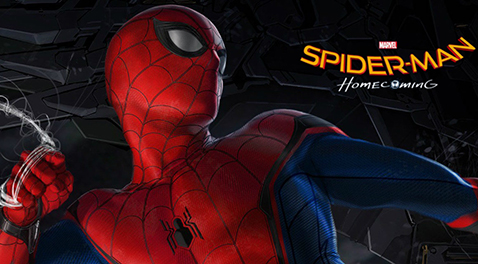 When Tobey Maguire played Spider-Man for the first time in 2002, we got the whole origin story of a nerdy high school kid who gets bitten by a genetically modified spider and suddenly has super strength and web-spewing capabilities. Maguire went on to two more so-so Spider-Man adventures before the franchise ran out of steam. Then Andrew Garfield took over in the 2012 reboot, and we were back to the origin story again, although no one seemed to care, and the franchise only lasted through one more sequel.

Now, we get “Spider-Man: Homecoming,” and thankfully, it’s not an origin story, but it’s close. We don’t get the very beginning of Peter Parker’s web-slinging adventures, but he’s still a high school nerd (now played by Tom Holland) who has to deal with his crush on the cute older girl while also trying to take down a super-villain and become one of the Avengers — like his heroes Iron Man, Captain America, etc.

In any super-hero or super-spy movie, you need a great actor playing a great villain, and “Spider-Man: Homecoming” has one in Michael Keaton as The Vulture. That’s right, the guy who’s already played Batman and Birdman now takes on Spider-Man. The plot, as if it matters, has to do with Keaton and his cronies selling alien equipment on the black market, and Spider-Man’s efforts to stop him. Take that premise and add in a lot of stunts and a helluva lot of computer-generated effects and you have an exciting adventure with a few giggles along the way, although some of the high school portions of the story felt too obvious and kinda flat.

Movies like this come down to two things — the quality of the CGI and the magnetism of the guy in the spider suit. Tom Holland is so much better than Andrew Garfield was, and right up there with Tobey Maguire in handling the duality of his role very nicely. Plus, whenever Robert Downey Jr. shows up (as either Tony Stark or Iron Man) he adds an extra level of excitement to the goings-on. The supporting cast includes Marisa Tomei, who still sparkles on screen as Peter Parker’s Aunt May, as well as Jon Favreau, Laura Harrier, Zendaya, Donald Glover, Hannibal Buress, and Bokeem Woodbine (a name I’ll never forget from the second season of FX’s “Fargo”).

If you’re a fan of the Marvel Cinematic Universe, you won’t be disappointed. If you’re not — like me — you might still enjoy “Spider-Man: Homecoming” because it’s executed very well.