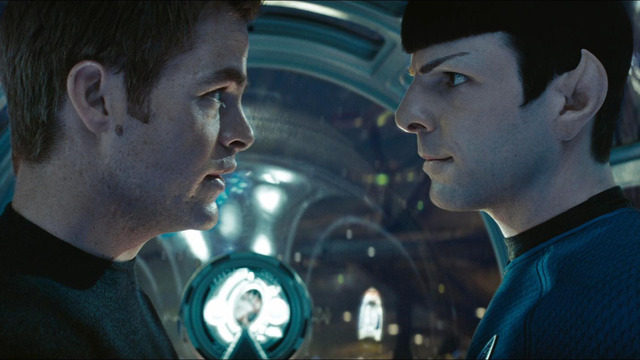 I get sucked into “Star Trek” movies the same way as James Bond movies. I’ve been going to see each entry in the series for so long — this year marks the 50th anniversary of the debut of the original series — that I think I’ll miss a great one if I don’t see them all. Two hours later, when I walk out, I inevitably have a little bit of an empty feeling. That’s the case again with “Star Trek Beyond.”

The plot isn’t anything special. The Enterprise is lured into a trap by a planet-ruling villain named Krall. He crashes the ship and and kidnaps the crew, which doesn’t seem to matter much, because as we’ve seen so often before, that giant space vessel really only needs seven people to run it — Kirk, Spock, McCoy, Sulu, Chekhov, Uhuru, and Scotty. The rest of people on board don’t seem to do anything important, and very few of them even get speaking roles. But Kirk and his half-dozen colleagues still have to save them and defeat Krall.

What is Krall’s plan? It’s not clear at all and it doesn’t matter. Space villains all want two things — some sort of revenge and to rule the universe, often by destroying everyone else in it. Idris Elba plays the megalomaniacal bad guy this time, another entry for his very busy IMDb page — in just the last two years, he’s starred in “Beasts Of No Nation” and “Avengers: Age Of Ultron,” and done voice work for “Finding Dory,” “The Jungle Book,” and “Zootopia.”

“Star Trek Beyond” is dedicated to the late Leonard Nimoy, whose memory is invoked a couple of times in the script by Doug Jung and Simon Pegg (who plays “Scotty”). There’s a nice turn by Sofia Boutella (the scissor-legged woman from “Kingsmen: The Secret Service”) as a zebra-skinned alien who works with Enterprisers. The action sequences are fine, as you’d expect from director Justin Lin, who did several “Fast and Furious” movies. The effects are good, but sometimes they’re too much, and quite a few scenes are too dark to really see what’s going on, particularly with 3-D glasses.

Unfortunately, in “Star Trek Beyond,” we’re still doomed to a future where you have to fight your enemy in hand-to-hand combat, even if it is on the top of some futuristic structure. There’s also a ridiculous scene where Kirk just happens to find an old motorcycle — gee, I wonder if he’ll get a chance to ride it in a big action sequence?

Bottom line: if you’re a “Star Trek” fan, you’ll like it. If you’re not, you won’t bother. My final rating comes somewhere in between. I give it a 6 out of 10.