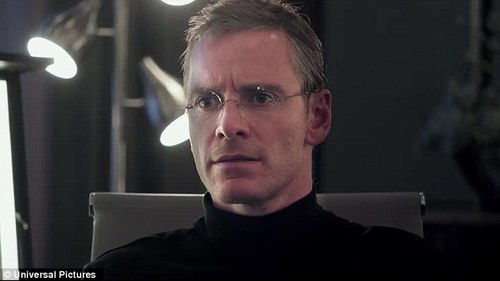 “Steve Jobs” should be called “Steve Jobs Argues With Everyone.” That’s all we see, in three extended scenes which all take place backstage before big product introductions (for Macintosh, Next, and iMac computers). Michael Fassbender is fine as Jobs, Seth Rogen is okay at Steve Wozniak, Jeff Daniels is good as Apple CEO John Scully, but it is Kate Winslet who gives the best performance as marketing exec Joanna Hoffman, who has to try to keep Jobs on track.

Unfortunately, the whole movie comes off showing Jobs as a jerk to everyone around him — his employees, his partners, even his daughter. There’s nothing to explain why he was a visionary, even in the flashback scenes, which are disruptive, not informative. For that, I blame director Danny Boyle.

But most of the fault lies in Aaron Sorkin’s script, which is too talky — even for him. I’m a Sorkin fan, from “A Few Good Men” to “The West Wing” to “The Social Network” and even “The Newsroom.” However, the structure he’s used to tell part of Jobs’ story is, frankly, boring and tedious. Worse, it ends in 1998, before Jobs got to the devices that did change the world (iPod, iPhone, and iPad) and grew his cult-like following into a global sensation. I give the movie 4 out of 10.

By the way, “Steve Jobs” did not open to big box office this weekend. Perhaps the public doesn’t care, or perhaps its interest has already been sated by at least two other Jobs biopics, a documentary, and Walter Isaacson’s book (of those, only the latter was a success). Sorkin and Boyle won’t change that with this tedious exercise.