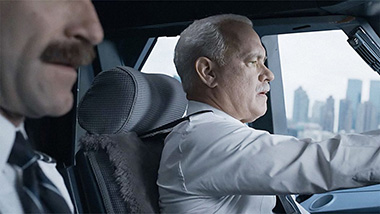 In January, 2009, Chesley Sullenberger became the most famous pilot in the world when he landed US Airways flight 1549 on the Hudson River after its engines were knocked out by a flock of birds, saving the lives of all 155 people on board. The story was destined to become a movie, and now it has, with Tom Hanks as “Sully.” After “Apollo 13” and “Captain Phillips,” Hanks is our go-to real-life disaster bio-movie guy, and he’s as good as ever in this one.

Some reviewers have compared “Sully” to “Flight,” the Denzel Washington movie of a few years ago. The trailers for the latter all showed Washington as the pilot of a big jet in trouble, which he saved by doing a barrel roll and landing the thing on its back in a field. If you only saw the trailer, you would have thought it was an action movie about an exciting, heroic pilot. In fact, it was a character study of an alcoholic — Washington’s character was drunk when he flipped the plane, drunk off duty, even drunk when he was called on the carpet to answer for his actions. If you’ll excuse the pun, it was a very sober look at a man with an addiction problem who happened to fly for a living.

“Sully,” on the other hand, is about a pilot with four decades of experience who is completely in control of the situation and makes the proper decisions under pressure. The only similarity is the remarkable footage of a plane doing something it’s not supposed to do, and director Clint Eastwood and his CGI team got it right. Like “Apollo 13” and “Captain Phillips,” I knew this story had a happy ending, but that didn’t keep me from gripping the armrests the first time the plane headed for the water.

Every movie needs conflict, so Eastwood has made the NTSB investigators the bad guys. They (Mike O’Malley, Jamey Sheridan, and Anna Gunn) put Sully and co-pilot Jeff Skiles (Aaron Eckhart in his best role in years) through an investigation to see if they could have turned back and landed on a real runway instead of a river. As that inquiry progresses, we see the 208 seconds of US Airways flight 1549 from several perspectives — inside the cockpit with Sully and Skiles, inside the cabin with the flight attendants and passengers, and through the eyes of New Yorkers who were shocked to see the plane coming down on that winter day seven years ago.

There are complaints from some of the real-life NTSB investigators who aren’t happy with their portrayal in “Sully,” but I notice that every interview with them includes an admission that they haven’t seen the movie yet, so their perspective seems moot. There’s also been some whining about Eastwood including scenes from Sully’s nightmares in which the plane crashes into buildings in New York, which is supposedly insensitive to everyone who remembers 9/11. Nonsense. That’s exactly the reason why those bad dreams were so vivid, and they’re presented beautifully on the screen.

The other member of the cast I have to mention is Laura Linney, who has the thankless task of playing Sully’s wife, Lorraine. We only see her when she’s talking to him on the phone, reminiscent of Sienna Miller as Chris Kyle’s wife in “American Sniper.” Neither of them were given much to do, which is often the case in Eastwood’s movies, and their presence adds nothing to the plot.

Walking out of the theater, I laughed as I thought of the announcement made on every flight, where the attendants demonstrate the life vest we should use — along with our seat cushions as flotation devices — “in the event of a water landing.” They make it seem like it’s a routine event that we can easily live through. Yet I can’t remember another story of a big jet coming down on any body of water without sinking and/or killing many of the people on board. That’s what made Sully’s accomplishment so remarkable, and its big-screen version so enjoyable.

One last thing. On the night before the movie opened, Tom Hanks appeared on “Jimmy Kimmel Live,” and Chesley Sullenberger made a special appearance to announce that he had turned the tables on the man who played him in a very special theatrical trailer…