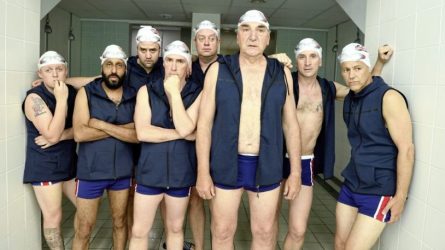 I became a fan of Rob Brydon after seeing him doing dueling Michael Caine impressions with Steve Coogan in “The Trip” and its two sequels. Now Brydon is at the center of an ensemble in “Swimming With Men.”

He plays Eric, a CPA who is extremely bored with his life at a big accounting firm. He’s not happy at home, either, because his wife, Heather, has just won a seat on the local council and spends a lot of time with a male colleague Eric immediately grows jealous of. The only place Eric enjoys himself is at the local pool, where he goes to swim laps a few times a week.

One evening while there, he notices a group of seven men sitting underwater on the bottom of the pool. It turns out that they’re also going through mid-life crises and have created a club at the pool where they practice synchronized swimming (rule #1: no talking about swim club). They convince him to join, he agrees, and we’re off on a fun little adventure.

With its hey-we’re-having-fun spirit, “Swimming With Men” draws favorable comparisons to “The Full Monty,” although there’s no nudity, just a bunch of middle-aged men in swimsuits holding in their stomachs. All of the guys — and their female coach — are perfectly cast. I found myself laughing out loud several times (along with the rest of the packed audience), enjoying a rollicking good time. It won’t open wide until next month, but when it does, it’s going to have great word-of-mouth. It’s one of my favorites of the year, so I recommend you see it if you enjoy feel-good comedies.

Two important notes I must add: