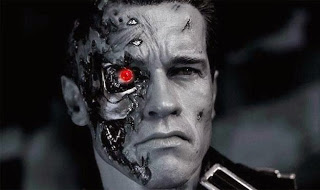 I won’t be on the air Friday because KTRS is running Fourth-Of-July-Weekend programming, but I will do three bonus shows next week when I fill in for John Carney on his 1-3pm CT show Monday, Tuesday, and Wednesday. Since I won’t be on Friday, and thus won’t get to do my Showbiz Show segment with Colin Jeffery, which would include my review of “Terminator: Genisys.”

There are some sequels you can see without knowing the original and you’ll still understand what’s going on (I haven’t seen “Jurassic World,” but I’m told it works for first-timers). However, if you haven’t seen the original two “Terminator” movies, you won’t have any idea what’s going on in this one. In fact, even if, like me, you’ve seen the first three “Terminator” movies, you’re still going to be mighty confused, because the plot is so dense and caught up in subplots and alternate time lines.

I’m not going to try to explain the plot, other than to say it involves yet another attempt by humans to prevent Skynet from becoming self-aware and killing us all. That involves characters traveling through time (in a device that looks like it was built from the same blueprint as The Machine in “Contact”), but they never set the machine to show up a year or even a month before the disaster they’re trying to avoid will occur. They always reappear on the very day it’s going to go down, and they have to race the clock to stop it — but if you can skip through time to any point, why race? It makes no sense, just like the teeth on the skull-crushing robotic machines of the future. They don’t eat food, so what are the choppers for?

Aside from that, you get a lot of hand-to-hand combat between machines that won’t die, bad 3-D effects with debris from explosions flying in your face, and two lead actors — Emilia Clarke and Jai Courtney — who have no charisma at all. Moreover, the word “poignant” should never apply to a “Terminator” movie, but the filmmakers tried to make us care about the Sarah Conner/Kyle Reese relationship. All that did was get in the way of Arnold Schwarzenegger having more screen time and, face it, he’s the only reason to see a “Terminator” movie. Even the scene where he fights a younger version of himself isn’t a good enough reason for you to see this one.

You’d have a better time playing with Sega Genesis or listening to an old Genesis album than watching “Terminator: Genisys.” Rating: 3/10.