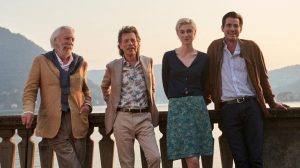 I’ve said it before, I’ll say it again: I still don’t get art. I can tell you whether I like a painting or not, but I can’t begin to explain to you what makes one piece “good” and another one “bad.” However, if I listen to someone who’s an expert on the subject, I’ll usually buy into whatever they tell me about what’s on the canvas and the artist who put it there. It could be complete nonsense, but if the story is interesting and well told, that’s good enough for my sensibilities.

“The Burnt Orange Heresy” starts with one of those stories, as told by pill-popping art critic James Figueras (Claes Bang) to a roomful of American tourists who want to soak up some culture but need him as a guide. It doesn’t matter what tale he tells, they’re enthralled — but not enough to buy the book he’s written about the importance of his profession. When the crowd files out, as he boxes up the unsold copies of his paperback, only one young woman named Berenice (Elizabeth Debicki) remains. She and James have one of those movie conversations that you know is just a prelude to them ending up in bed, and pretty soon we’re watching them in his hotel room having sex.

The next day, he invites her to join him on a road trip to the estate of Joseph Cassidy (Mick Jagger) on the shores of Lake Como in Italy. Cassidy is a wealthy art collector who knows that James’ career isn’t going as well as he’d like, so he has a proposition. It turns out that living in a guest house on Cassidy’s property is Jerome Debney (Donald Sutherland), a painter who was once world-famous, but whose work was all destroyed in a fire 50 years ago — and he hasn’t created a thing since.

Joseph offers James an opportunity to interview Jerome, which would be quite a career-boosting coup. In return, the collector wants the critic to convince the artist to paint something new, which, as the only extant work of a famous painter, would have a lot of value — which is why Joseph covets it and expects James to procure it for him.

This would all be kind of boring (who cares whether a very prosperous guy gets to hang another picture on his wall?) if it were not for the performances.

Debicki, who I first noticed in the dreadful “The Man From UNCLE” and then the overrated “Widows,” plays Berenice as a cool blonde who may have a secret. Bang, who I last saw as the villain in “The Girl In the Spider’s Web,” reminds me a lot of Pierce Brosnan in “The Thomas Crown Affair” and “The Matador.” Debicki and Bang are both very attractive people who have good chemistry right from the start, even though it’s not clear what their characters’ motives are until well into the movie. He’s also two decades older, causing my wife to comment on one of her favorite movie tropes, “Of course the middle-aged guy gets the hot young woman!”

Sutherland, as always, is can’t-take-your-eyes-off-him reliable. At 85, he’s still stealing attention from his younger male co-stars with a gleam in his eyes. Jagger, who’s 77, but looks at least three years younger, pulls off the pretentious rich guy act pretty well (I’d bet his various homes are full of expensive art). In fact, he’s never been this good on screen — and he looks like he knows it.

The scenery throughout is beautiful, from the views of Lake Como to the interior of Joseph’s mansion to the city scenes that bookend the movie. Unfortunately, director Giuseppe Capotondi and writer Scott B. Smith (who adapted the screenplay from a novel by Charles Willeford) didn’t know how to resolve their story. Instead of a satisfactory denouement, the plot rushes to a finish that’s supposed to be full of symbolism, but leaves me puzzled — and not in a good way.

“The Burnt Orange Heresy” is an art house movie about art and the people who profit from it — or try. I give it a 7 out of 10.

Note: The photo at the top of this review is a publicity still, not from a scene in the movie, because at no point are these four characters together at this location. But I wanted to include all of them.