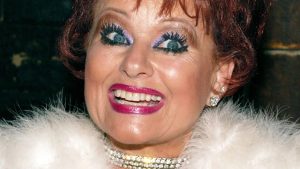 It’s only appropriate that a biopic about someone famous for wearing a lot of makeup would need an outstanding makeup job to work. For “The Eyes Of Tammy Faye,” it must have taken a team of people, some prosthetics, and several hours a day to turn Jessica Chastain into Tammy Faye Bakker, but the result is remarkable. So are the Tammy Faye squeaky voice and giggle, which Chastain nails.

Unfortunately, the rest of the movie isn’t as good as she is.

“The Eyes Of Tammy Faye” chronicles the life of the former TV evangelist who, with husband Jim, built an empire that came crashing down because of their greed. They defrauded viewers of their PTL network to build a gaudy, ostentatious lifestyle and pay hush money to church secretary Jessica Hahn after Jim allegedly raped her. The Bakkers made several appearances on “Larry King Live” and “Nightline” with Ted Koppel, pretending everything was fine, claiming they’d done nothing wrong. On those shows and in other interviews, Tammy Faye almost always burst into tears, which caused her mascara to run — a sight parodied to perfection by Jan Hooks on “Saturday Night Live.” Those of us doing morning radio at the time had a lot of fun at the Bakkers’ expense.

My overriding question is why did Jessica Chastain decide to make this biopic? The story has been told before, including in the 1990 movie, “Fall From Grace,” starring Kevin Spacey, and a documentary also named “The Eyes Of Tammy Faye,” from 2000. It’s obviously a passion project, as Chastain is among the movie’s producers. Did she somehow feel the need to rehabilitate Tammy Faye’s image and make us feel sympathy for her, 14 years after her death? The movie portrays Tammy Faye as an unwitting victim, a true believer who got caught up in something she knew little about. But the fact is that she was as avaricious as her husband, and an enabler of his criminal activities.

Fellow religious con men Pat Robertson and Jerry Falwell (played here by Gabriel Olds and Vincent D’Onofrio) have always made my stomach turn, and this movie implies that those televangelists disdained the Bakkers enriching themselves through donations — while cashing their own followers’ checks to underwrite their own high style of living. Meanwhile, the political agendas of Robertson and Falwell clashed with that of the Bakkers, whose only goal was to squeeze every possible dollar out of the suckers who made up their flock.

As Jim, Andrew Garfield projects just the right combination of smarmy and sleazy, while Cherry Jones wears out her frown muscles as Tammy Faye’s mother, who seemingly disapproved of everything her daughter did. But the movie is Chastain’s baby, so she appears on screen throughout, singing several times, and adding more trowels full of makeup as the years go by.

But “The Eyes Of Tammy Faye” offers nothing new and never rises above a run-of-the-mill biopic as it traces its subjects’ rise, fall, and semi-redemption. For those of us who lived through the era of Jim and Tammy Faye’s omnipresence, I doubt there’s much interest in reliving their story. For those born since then, there have been enough other scandals and over-the-top personalities to focus on.

I give “The Eyes Of Tammy Faye” a 5 out of 10 — with all of those points directly attributable to Chastain’s performance and her hair/makeup/prosthetics team.