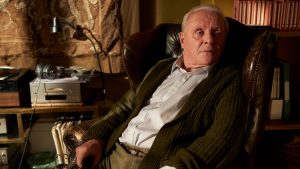 “The Father” is a tough movie to watch, particularly for those of us whose parents developed dementia in their later years. It was written and directed by French playwright Florian Zeller, adapted from his stage play, which was produced on Broadway in 2016. I saw that production, with Frank Langella in the title role, and walked out emotionally wrecked.

I felt the same after watching the film, which stars Anthony Hopkins as Antony, an octogenarian in London whose mind is failing him. Olivia Colman plays his daughter, Anne, who has taken on the responsibility of caring for Antony after yet another nurse has left because of the way he mistreated her. Anne clearly loves her father and is pained by what he’s going through, but it’s rough on her, too. Thus, “The Father” is not only about the frustration Antony experiences because of the disease, but also the difficult, draining role of caring for a dementia patient.

In each scene, Antony tries to make sense of his world, but he’s racked with confusion moment to moment, day to day, week to week. To illustrate Antony’s uncertainty, Zeller has different actors play the same roles, so he’s not sure which one’s Anne, which one’s Anne’s husband, or which one’s the new caregiver. Moreover, Antony’s not even sure whether he’s in his own upscale apartment or his daughter’s, because the furniture and draperies change subtly, too.

This leads Antony to various mental states that are typical in dementia patients, including paranoia, anger, and fear — as well as an outright refusal to be placed in a nursing home. Hopkins portrays each of these brilliantly, often turning on a dime from flirtatious to stubborn to scornful. He’s completely believable playing Antony with a faraway look in his eyes that’s only occasionally replaced by clarity. I vividly remember that image from my mother’s final year.

Hopkins has played a man with dementia before, in the underrated 2005 drama, “Proof.” But in “The Father,” he’s the focus of every scene and absolutely riveting to watch. Colman stays with him step for step, with an expressive face which lets us see Anne’s hurt at some of the things Antony says to her, the difficulty of trying to communicate with someone who has no shared reality, and the devastating emotional toll of a daughter who’s lost all connection with a parent.

There’s nothing feel-good about “The Father,” but it will strike a chord with anyone who’s had to care for an elderly loved one whose body still works, but whose brain has abandoned them. For those who haven’t experienced those circumstances yet, it may be a preview of what’s to come.

I give “The Father” a 9 out of 10. It opens in theaters today, and will be available for streaming via video on demand on March 26.