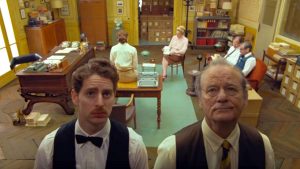 His quirky style is in full bloom as he weaves several separate stories as told by the staff of The French Dispatch, a New Yorker-like literary magazine, as it puts together its final issue. That means plenty of splashes of color, fascinating locations, and more appearances by his repertory company, including Bill Murray, Owen Wilson, Willem Dafoe, Jason Schwartzman, Adrien Brody, Frances McDormand, Tilda Swinton, and Edward Norton.

The movie takes place in post-WWII France in the town of Ennui-Sur-Blasé (!). The first of its stories involves an imprisoned painter (Benicio del Toro), his nude model/jailer Simone (Léa Seydoux), and a smug art dealer (Brody), with cameo work by Henry Winkler and Bob Balaban that brought a smile to my face. The second and least interesting chapter tells the tale of French revolutionaries led by a student named Zeffirelli (Timothée Chalamet). The final element is about food, a criminal accountant (Dafoe), a showgirl (Saoirse Ronan), and the search for a lost son.

All of this is told with impeccable production design and camera work that never lets you forget you’re watching a Wes Anderson movie. For his fans (and perhaps readers of The New Yorker), that will be enough. For others, the impressive cast — which also includes Elisabeth Moss, Jeffrey Wright, Lois Smith, and Christoph Waltz — may be a draw.

But for me (an admitted non-Anderson-phile), the form-over-function construction of “The French Dispatch” caused my attention to wane after the first third. Its magazine framing device has less to do with journalism than with tying its disparate pieces together — but those misfit characters, led by Murray, were the ones I wanted to spend more time with.

I give “The French Dispatch” a 5 out of 10. Opens in theaters today.