Movie Review: “The Harder They Fall” 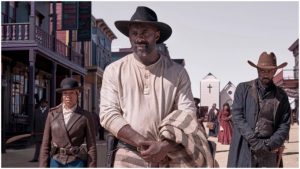 With apologies to Ryan George, and instead of my usual movie review format, let’s peek in at a pitch meeting in Hollywood:

Producer: I have an idea for a movie.

Studio Head: A western? There haven’t been any good westerns in the last couple of decades. How is yours different?

Producer: Almost everyone in it is Black.

Producer: Did I mention they’re all Black?

Studio Head: Yes, I got that. Now tell me the basics of the story.

Producer: We have Idris Elba and Delroy Lindo.

Studio Head: And what do they do?

Studio Head: You still haven’t told me the story.

Producer: Well, there’s a gang of bad guys and a gang of good guys and they get into it over some stolen money.

Producer: No, that’s not it. We also have Regina King and Zazie Beetz.

Studio Head: Do they play the usual female stereotypes in Westerns, like bar owners and sex workers?

Producer: No, they’re badass women who are also members of the gangs.

Studio Head: Does that mean you’ll eventually get them into a brawl where they have to fight hand-to-hand with whatever objects are around?

Producer: Hey, you read my mind. Also, we bought a bowler hat for Regina King and it fits her perfectly.

Studio Head: OK, I’m still not sure there’s much of a story here.

Producer: Did I mention there will be a lot of blood? I mean so many blood spurts Quentin Tarantino will think we overdid it.

Studio Head: So a lot of people get shot?

Producer: Yes, in the head, the body, the foot, every body part, because, uh, did I mention it’s a western?

Studio Head: Every time you say that, instead of getting more information about the plot, I hear a harmonica around a campfire.

Producer: Oh, no, we’re going to use contemporary music for the soundtrack. Think Jay-Z and CeeLo Green.

Studio Head: So, it will be era-inappropriate?

Producer: I prefer to call it era-agnostic.

Studio Head: But you have the rights to the Jimmy Cliff song, right?

Studio Head: The Jimmy Cliff reggae classic, “The Harder They Fall.” That’s where the title of the movie comes from, isn’t it?

Producer: Um, never heard of it.

Studio Head: That’s odd. How about filling in some of the dramatic holes for me?

Producer: I mentioned that everyone’s Black in the movie, didn’t I?

Studio Head: Yes, but that’s not a plot, that’s a casting decision.

Producer: I think that’s all I need to make this a runaway hit.

Studio Head: Well, I think you’re a little thin on storyline. I’m not sure about this whole project.

Producer: If you don’t buy it, Netflix will.

It turns out Netflix did buy “The Harder They Fall,” and it’s now streaming. If you’re a fan of western movie cliches but have been itching to see them played out by a Black cast, this is the movie for you. But I felt it came up really short, so — even with that first-rate cast — I can’t give it more than a 4 out of 10.