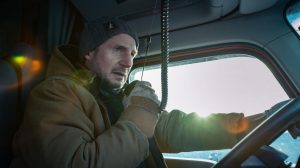 Rule #1 of a Liam Neeson action picture: when it’s over, his character will have beaten any opponent dumb enough to have gotten in his way.

Rule #2 of a Liam Neeson action picture: if, at any point in the movie, you doubt he’s going to come out on top by the time the end credits roll, revert to Rule #1.

And so it is with “The Ice Road,” in which the 69-year-old actor plays a long-distance trucker who’s called into service after an explosion and cave-in at a diamond mine in far northern Manitoba, Canada. In an attempt to free 26 trapped miners before their oxygen runs out, the company hires three drivers to bring in rescue equipment too heavy to be flown in. The problem is they’ll have to steer their rigs over an ice road that, while frozen solid in the winter, has begun to melt because it’s April. Thus, it may not be thick enough to withstand the weight of the rigs and their cargo.

The guy in charge of the trucking company, Goldenrod (Laurence Fishburne), can’t use his regular drivers, because they all went south once the season ended. So, he hires Mike (Liam Neeson) and his brother Gurty (Marcus Thomas), an Iraq War veteran whose PTSD has kept him from holding onto jobs despite being a brilliant mechanic. Goldenrod, who will be behind the wheel of another rig, also hires an Indigenous driver named Tantoo (Amber Midthunder), who is forced to take along the mining company’s insurance guy (Benjamin Walker) — because actuaries love danger, as you know.

Having the drivers battle the elements is not enough for writer/director Jonathan Hensleigh, who adds human villains to the proceedings to make the task even more difficult. That ramps up the action, particularly in the final third of “The Ice Road,” which unfortunately deteriorates into truck chases and fist fights on the ice. But the first two-thirds of the movie contain plenty of situations that, through a combination of practical effects and CGI, had me on the edge of my seat. Credit must also go to cinematographer Tom Stern, who captures the frozen open vistas beautifully without sacrificing the events in the foreground.

Despite my complaints about the way it resolves, “The Ice Road” did leave me satisfied enough to give it a 7.5 out of 10. It’s now streaming on Netflix.