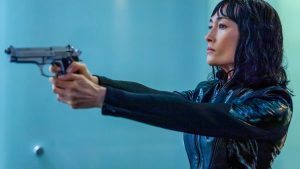 I missed “The Protege” when it debuted in theaters in August, but caught up with it now that it’s available on DVD and video-on-demand. Be aware that this review contains major spoilers.

There must be a red beacon in Samuel L. Jackson’s house that lights up anytime a casting director in Hollywood says, “We need a Samuel L. Jackson type for this role.” When he sees the beacon, Jackson calls his agent and accepts the job even before it’s been offered. The agent asks, “Don’t you want to see a script so you know what the movie’s about?” “Nope,” replies Jackson, “whatever it is, I can do it in my sleep and cash the check.”

That would explain how Jackson ended up playing his same old character in “The Protege,” an action movie starring Maggie Q as Anna, who Moody (Jackson), a top assassin, brought up and taught the skills necessary for the business before he was killed on a job. Anna goes on a revenge tour to take out whoever killed him, resulting in the usual gun-fights and hand-to-hand battles you’ve seen in a hundred movies like this. Along the way, she meets a lot of tough guys who prove no challenge for her — it helps when the other guy’s bullets keep missing but yours hit their targets every time.

Eventually, Anna comes up against Rembrandt, a really bad guy who doesn’t yell or growl his threats. As played by Michael Keaton, he’s the type of quietly menacing villain who banters wittily with Anna over their mutual deadly intentions and somehow — spoiler alert! — ends up in bed with her. It’s a cheap plot device that didn’t belong in the movie, if only because Keaton is almost two decades older than Q. Besides, by that point in the movie, I had higher expectations for her decisions.

Here’s another spoiler: it turns out Jackson’s Moody hasn’t been dead after all, so he can return later in the movie to help Anna get out of a tight situation and finish her revenge mission. That’s just lousy, lazy writing, which is what I expect from Richard Wenk, who has developed similarly subpar screenplays for “The Equalizer,” “Countdown,” and “The Expendables 2.”

“The Protege” has obvious links to “Point of No Return” and its predecessor, “La Femme Nikita,” which is appropriate because Maggie Q starred in the TV series “Nikita” a decade ago. She still has the chops to pull off the action sequences and has can’t-take-your-eyes-off-her appeal every moment she’s on the screen. Too bad she hasn’t been given better projects to star in.

As much as I admire the movie’s three leads, I can’t recommend “The Protege,” which I rate a 4 out of 10.