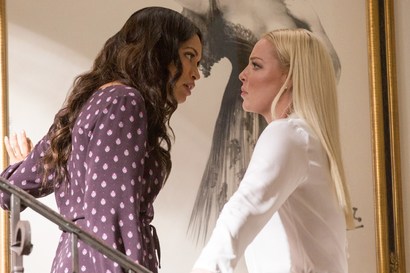 “Unforgettable” is a psychological thriller starring Katherine Heigl as an ex-wife, Rosario Dawson as the ex-husband’s new girlfriend, and Geoff Stults as the man in the middle.

After all those so-so romcoms that left her career in a ditch, Heigl finally gets to play the villain — an ice queen with mental issues — and she does it very well. Dawson’s character takes a little too long to catch on to the devious ways Heigl is trying to undermine her relationship, but she plays it as straight as she can. There are also a little girl thrown in as a pawn to be tossed around by the adults and an ex-boyfriend who Dawson had a restraining order against, but it’s now expired, so you know he’s gonna be part of the plot, too. The supporting cast includes Cheryl Ladd — almost unrecognizable due to too much Botox — as Heigl’s controlling mother, and Whitney Cummings, who created “2 Broke Girls,” as Dawson’s gal pal.

You don’t go to popcorn movies like “Unforgettable” expecting greatness. Though it seems like something you’d see on Lifetime, there are some tense scenes that will grab you, and the rest does exactly what it’s supposed to do (which may include resuscitating Heigl’s career). Think of it as a Nancy Meyers movie by way of “Fatal Attraction.”