Movie Review: Why Him? 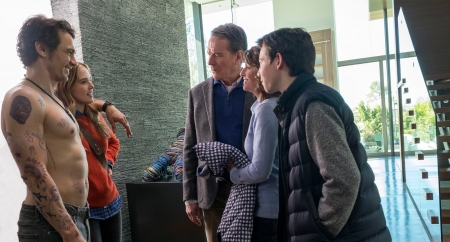 Sometimes, I like to see a movie that I know is going to be moronic. That’s why I’ve gone to check out things like “Bad Santa,” “Hot Tub Time Machine,” and now “Why Him?”

James Franco is a Silicon Valley gaming billionaire with no filter (usually with no shirt) and Bryan Cranston is the uptight father of a Stanford college student (Zoey Deutch) who’s in love with him. Cranston and his wife (Megan Mullally) go to visit them in California only to be shocked by everything Franco says, does, and has.

As I hoped it would be, “Why Him?” is relentlessly stupid and incredibly raunchy (the only movie this year that beats it in that category is “Sausage Party”). Unfortunately, Deutch — who’s supposed to be at the center of all this chaos — is given virtually nothing to do, but Mullally picks up the slack as the wife who loosens up as things proceed. “Why Him?” works because of Franco and Cranston, who gets to be goofy for first time since Malcolm In The Middle while at the same time playing the straight man with the slow burn.

There are cameos by Elon Musk and a couple of rock stars you’ll recognize. Keegan-Michael Key is funny as always playing Franco’s butler/righthand man. Kaley Cuoco’s along as well, as the voice of Justine, the Siri-like artificial intelligence that’s in every room of the house. Cedric The Entertainer has a few supporting scenes as an employee of Cranston’s stationery company that’s facing financial problems in an era when fewer people are using paper.

I’m giving “Why Him?” a 6 out of 10, but with two warnings — don’t set your expectations too high (come for the stupid, stay for the moose urine) and if you’re easily offended by four-letter words, stay away.