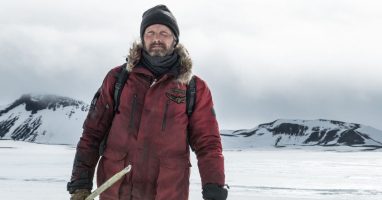 I missed “Arctic” when it came to theaters earlier this year, but caught it on DVD, and liked it enough to add it to my Movies You Might Not Know list.

It opens in an unspecified, vast, frozen region, where a lone man is chipping away at the ice to form a giant “SOS.” We don’t know who he is or how long he’s been there, but it becomes clear he was in a small plane that crashed, killing the only other occupant, who may have been the pilot or the passenger. Those details don’t matter. All we need to know is that this man, whose name we later learn is Overgard, is a long way from anyone else and must stay alive on his own.

Overgard is played by Mads Mikkelson, the biggest movie star in Denmark, who you may remember as the star of NBC’s “Hannibal” or as the villain Le Chiffre in the 2006 Bond movie, “Casino Royale.” He’s terrific in this role, which is made even tougher by the almost total absence of dialogue. There’s no narrative device for Overgard like Tom Hanks talking to Wilson, the volleyball in “Cast Away,” or detailing his life to a video camera a la James Franco in “127 Hours.” That means Mikkelson must get us to relate to this stranded man’s situation with nothing more than his physicality, which he does extremely well.

“Arctic” contains one of the greatest dilemmas I’ve seen on screen in a long time. I won’t give away too much, but at one point, another character appears with a life-threatening wound. Overgard decides to try to make what he estimates is a five-day trek across the frozen tundra, dragging her along on a sled through the frigid conditions, to where he hopes there is an air base with personnel who can rescue them. During that journey, he encounters a rocky ridge that wasn’t on the map and is too steep to pull the sled up. He climbs to the top alone to see what other obstacles he might face, and from there sees what seems to be a straight, flat, unobstructed path forward. He’s sure he could make it on his own, but does he leave the wounded woman behind to die in the elements?

Mikkelson plays this impossible decision so well I fully felt his pain and desperation. Though “Arctic” moves a bit slowly for the first twenty minutes, moments like that make the whole movie worthwhile.

“Arctic” only played in a couple hundred theaters when it was released in February, didn’t make a lot of money, and isn’t streaming on Netflix or Amazon Prime at the moment. But I’m glad I tracked down the DVD and watched it so I can recommend it to you and add it to my Movies You Might Not Know list.