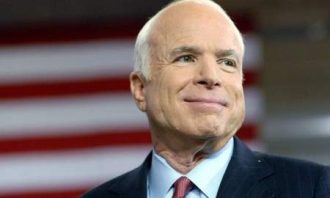 I was frustrated when President Joe Biden honored his old Senate pal John McCain yesterday with the Presidential Medal of Freedom, because I don’t understand liberals’ inability to remember all the horrible things McCain did while he was alive.

At the top of the list has to be his choice of Sarah Palin as his running mate in 2008. It wasn’t the move of a maverick, the adjective so often attached to McCain’s name for the last two decades.  It was, rather, an indication of McCain’s willingness to pander to the extreme right in the hopes of garnering votes, just as when he refused to denounce the Confederate Flag before the South Carolina primary in 2000 so as not to offend hard-line Dixie racists. He lost that primary and later apologized for his mistake, but never backtracked on the decision to pluck Palin from Alaskan obscurity. In doing so, he continued the GOP’s slide to stupidity that culminated in the election of Donald Trump. Incidentally, I hold the same disdain for Steve Schmidt, McCain’s then-campaign manager who first suggested Palin, and has somehow gone on to be wrongly considered the voice of reason on MSNBC.

Even after Trump insulted him in 2015 (“He’s not a war hero. He’s a war hero because he was captured. I like people that weren’t captured.”), rather than become a respected Republican voice regularly speaking out against the outrages of the Ego In Chief, McCain offered some occasional mild criticism but continued to vote with Trump more than 90% of the time. He did the same (95%) with the previous Republican president, George W. Bush. The definition of “maverick” does not mean “going along with the gang almost all of the time.”

Want some other negatives that liberals should remember about McCain?

Did John McCain do some good things? Certainly. But if you cite only the positives without the lengthy list of negatives, you’re not creating an honest eulogy, you’re building an undeservedly hagiographic legacy. I wish Biden (and Barack Obama, who spoke at McCain’s funeral) would remember that.