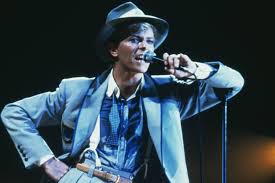 I never had the chance to interview David Bowie, but I do have a story about him.

In 1983, I was doing mornings at WHCN/Hartford when he came to town on his Serious Moonlight Tour. As an album-oriented-rock station, we had plenty of Bowie songs on our playlist, but he hadn’t done much for quite awhile. That changed with “Let’s Dance,” which would go on to become his best-selling album, thanks to production by Niles Rodgers and guitar work by Stevie Ray Vaughn. The title track became a big hit, as did “Modern Love” and “China Girl.” We had all three in regular rotation on the air.

As the dominant rock station in town, WHCN had a great relationship with concert promoter Jim Koplik, so I was able to get a couple of floor seats for the show for Martha and me. Phil Kirzyc, our nighttime rock jock, and his wife Val sat next to us. We weren’t in the front section, but the middle of the floor, with a wide aisle between us and the seats ahead of us. Bowie was in great voice as he sang his best catalog material — I was particularly happy to hear “Rebel Rebel” and “TVC15” — and several songs off the new album. Everything was going well until he returned for his second encore.

Above us, hanging from the scoreboard, were huge nets full of gold and silver mylar stars and crescent moons. I had noticed them when we walked in, but didn’t think anything of it. As Bowie launched into “Modern Love,” those nets were released, and hundreds of those mylar inflatables started falling — directly onto us. Naturally, fans started rushing towards the center of the floor to get a souvenir, and they weren’t shy about pushing and shoving. It quickly became apparent that the security guards were not prepared for the onslaught.

I was a little worried we were going to get crushed in the melee. My mind immediately flashed to The Who concert in Cincinnati a few years earlier where 11 people were stampeded to death. Was this going to be another great night of rock and roll marred by too many people squeezing into a small space at the same time?

I looked over at Val Kirzyc, who was about 8 months pregnant at the time. She had a look of pure fright on her face as more and more people jammed into the area around us. Phil grabbed my arm and said, “We have to get out of here — now!!” Bowie kept singing, oblivious to the scene taking place in the middle of the floor, so Phil and I had to shout to be heard over the music. We pushed people away from Val (and Martha), yelling that we had a pregnant woman here and needed some space. Somehow, we managed to force our way out and get up the stairs (not an easy task with fans streaming down) and out of the arena.

Once in the concourse, we stopped to make sure everyone — especially Val — was okay. We were all shaken, but no worse for wear. Phil said, “That was really scary.” To which Martha replied, “Yeah, but now you both have a great story for your radio shows!” You can see why I married her.

The next morning, I did tell the story on the air, and was happy to report the good news that no one in the crowd was seriously hurt that night. I heard from lots of listeners who were there who weren’t happy about it, either, and others who never went down to our section of the floor and thus had no idea how nerve-racking it was. For them, that Bowie concert was a terrific show put on by a top-notch rock and roll star.

That’s how I prefer to remember him, too, but the memory of the crush of people still lingers.