My Favorite Basketball Player Of All Time 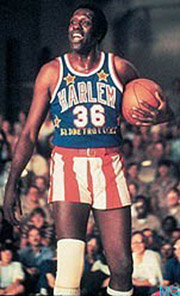 As a boy, I saw Julius Erving fly towards the basket from the top of the key and slam the ball through the hoop. As an adult, I watched Michael Jordan switch hands in mid-air and still complete a layup off the backboard. But I never saw anyone as entertaining on the basketball court as Meadowlark Lemon, the clown prince of the Harlem Globetrotters.

Not only could Meadowlark play, he forced everyone in the arena to have fun — regardless of their age, nationality, or distance from the action. From the moment he stepped on the court, he kept up a running patter over their two-hours-plus performances. Seeing Meadowlark, Curly Neal (who I had the pleasure of interviewing a long time ago), and their teammates doing classic Globetrotter routines was pure pleasure, but they were damned good basketball players, too. I doubt anyone has ever made as many hook shots from mid-court as Meadowlark. Sure, their opponents — especially the Washington Generals, led by set-shot legend Red Klotz — were on the payroll and forced to endure humiliation nightly, but the final score was never the point.

For tens of millions of people in more than a hundred countries, a visit from the Globetrotters was something to look forward to, and for two decades and over 16,000 games, no one made those visits more special than the man in the middle of that dribbling weave, Meadowlark Lemon, who died this weekend at 83 (or so).