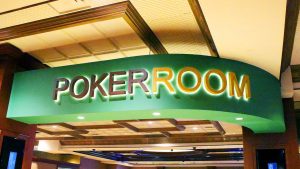 A year ago, after not playing poker of any kind for six months, I accepted an invitation from a friend to play online in a single table sit-and-go. As I wrote afterwards in a piece called “Deal Me Out,” the experience confirmed I’d lost interest in the game and had no intention of playing again — perhaps forever.

A year later, I feel differently, which is why I went to the Ameristar poker room the other night and played in a cash game for a few hours. One of the reasons I decided to return was that several good friends — whose judgment I trust — had also returned to the tables, and not just here in St. Louis. I asked them whether, during this COVID crisis, they felt confident being in close quarters with other players, and they all assured me they did. Even my doctor went to Las Vegas for a few days last month. Being vaccinated has its benefits.

Unlike more than 50% of the people in the room, I wore a mask the entire time, with the exception of two instances when I took sips from a bottle of water, because my mouth got dry after a couple of hours. By the way, the mask may be effective at keeping virus-infused aerosols out, but not so much when it comes to cigarette smoke. The first floor at Ameristar allows smoking, and the rancid odor of burning tobacco hit me the moment I set foot in the gaming area. But I quickly hustled up the stairs to the second floor, where the poker room is located and smoking isn’t permitted. Fortunately, the building’s ventilation system does a good job of keeping that stink away from the card room.

Because St. Louis has never been a destination for poker tourists, it depends on locals to keep the action alive. Thus, I spotted the same people I used to see all the time. Some had just started playing again in the last month, others had never stopped — either in home games, online, or poker rooms. Since this was a Friday night, the place was packed, with lots of 1-2 and 2-3 no limit hold’em games, a 20-40 limit hold’em table, and a 1/2/10 PLO game. I had called ahead of time to get on the list for all of them, and was happy a second PLO table opened minutes after my arrival and I got a seat (there would eventually be a third PLO table, too).

Though I hadn’t played a hand of live poker in 18 months, I fell right back into it, eventually getting over my COVID concerns enough to relax and enjoy myself. I probably played a few too many hands in my first hour, but settled down and managed to eke out a small win by the time I left four hours later.

Just a couple of years ago, I was complaining about the lack of conversation around the tables, a loss of the social aspect that makes playing poker more fun. So, I was happy to hear plenty of banter around the table, including stories of home games that had kept the hardcore players busy last year while the casinos were shut down. One guy told me he still played a couple times a week in a home game where none of the players were masked — and all got COVID. Another player related the story of a man we all knew to be a jerk having been so loud and obnoxious he was asked to leave the casino. But before doing so, he started throwing his chips at one of the TVs, trying to break it, which earned him a lifetime expulsion. Instead, he’d gone to play in a home game, where he’d also been kicked out for acting up.