MYMNK: “Devil In A Blue Dress” 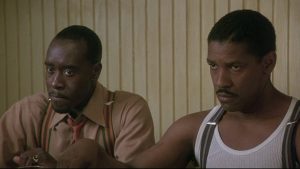 By 1995, Denzel Washington had established his big screen bona fides in “Glory,” “The Pelican Brief,” “Philadelphia,” and “Malcolm X.”  That’s why it was a disappointment when his leading role in Carl Franklin’s 1995 film noir, “Devil In A Blue Dress,” couldn’t draw enough box office business to cover the production costs. So today, I’m adding it to my Movies You Might Not Know list.

Based on the first of a series of novels by Walter Mosley, “Devil In A Blue Dress” stars Washington as Easy Rawlins, a World War II veteran who has just been laid off from his job at a factory. Desperate to find new work, he accepts an offer from a tough guy named Albright (Tom Sizemore), who wants him to find a woman named Daphne Monet (Jennifer Beals) on behalf of Todd Carter (Terry Kinney), a rich man who has just mysteriously dropped out of the Los Angeles mayoral race.

As in the best classic film noirs, Easy narrates the story as he finds himself dragged deeper into a situation he has to unravel while surrounded by characters who pop off the screen. The best of those is Mouse, an old friend from Houston, played by Don Cheadle in one of his first big movie roles. Mouse is the kind of guy you’re better off having on your side, but even then his volatility can be dangerous. Writer/director Carl Franklin gives Cheadle several flashy bits of business and dialogue, such as the line, “If you didn’t want him dead, why did you leave him with me?”

Rawlins, meanwhile, is cool-headed and determined, two characteristics that Washington plays to perfection. Whether he’s dressed in a white t-shirt or a full suit, he dominates every scene he’s in — even when he’s taking yet another beating from the cops, who are not enthralled with the idea of this Black man snooping around in their business.

It’s clear that someone in Hollywood thought the Easy Rawlins novels (Mosley wrote more than a dozen) would make a good series of movies, giving Washington a franchise he could return to again and again. Unfortunately, “Devil In A Blue Dress” recouped only $17 million of its $27 million budget, so any planned sequels were shelved. That’s too bad, because I would have loved to see Easy and Mouse take on more mysteries.

The good news is that Steven Spielberg’s Amblin Entertainment announced last month it has teamed with Mosley to develop an Easy Rawlins TV series. No stars, writers, or directors have been announced yet, nor where we’ll be able to watch it. But I’m looking forward to seeing what they come up with.