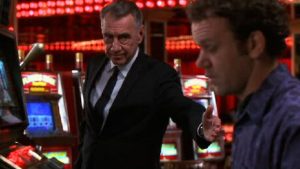 The newest addition to my Movies You Might Not Know list is the 1996 drama “Hard Eight.” It is one of the best movies about gambling, marked the start of Paul Thomas Anderson’s feature film career, and is a solid leading man showcase for Philip Baker Hall who has, for decades, been a go-to character actor.

Hall plays the protagonist, Stanley, who finds John (John C. Reilly) leaning against the outer wall of a diner, looking forlorn. Stanley invites him inside for coffee and a cigarette, and learns that John has come from Las Vegas, where things didn’t go well, and needs $6,000 to pay for his mother’s funeral. Stanley tells John he won’t give him that sort of money, and he won’t be able to get it by gambling, but he will give him a hundred dollars and share some strategies to get comped rooms, food, and more. A bit wary, John agrees to go along. When John follows Stanley’s instructions and ends up with a free hotel room, he’s hooked and fully onboard as the older man’s protégé.

I’ll stop here to point out that many of the techniques Stanley teaches John wouldn’t work today — in Vegas or St. Louis — because the big corporations that own the casinos don’t allow their floor personnel to hand out comps like they did in the second half of the 20th century. Today, you have to use your player card from the casino’s loyalty program, putting it in every slot machine you play, or getting swiped in by the dealers at table games. Then the casino’s algorithm tracks how long you play, how much you bet, etc. Contrary to popular belief, it has nothing to do with whether you win or lose — the casino merely wants you to stay and gamble. The more you do that, the better the chances it will take your money and you’ll get some freebies to keep you coming back.

At this point, we know nothing about Stanley’s past other than he’s obviously spent a lot of time in casinos. Always dressed in a suit and tie, he has the look of a classy, longtime gambler. But where his money came from or why he knows this lifestyle so well is a mystery to us — and to John.

Soon, we meet Clementine (Gwyneth Paltrow) — a cocktail waitress who starts dating John — and his new friend, Jimmy (Samuel L. Jackson), who handles security for one of the other casinos and rubs Stanley the wrong way. Through it all, Stanley remains stoic, with the attitude of a man who’s seen it all. It’s a perfect role for Hall who, with merely the tone of his voice, gets your attention and keeps it. That comes in handy when things get messy in the third act.

Having clearly studied the world of casinos and the people who populate them, Anderson makes good choices about his venues, opting for the old-time downtown Vegas spots rather than the flashier resorts on The Strip. He also pulls compelling performances out of his entire cast, including a short but explosive scene featuring Philip Seymour Hoffman as a craps player who taunts Stanley from across the table. Hoffman and Anderson must have liked working together, because they went on to make “Boogie Nights,” “Magnolia,” and “The Master.”

There’s not one sour or false moment in the entirety of “Hard Eight,” and you don’t have to know anything about gambling to enjoy it. Just sit back and let Philip Baker Hall teach you a thing or two.