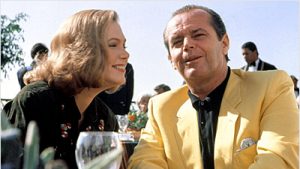 It’s been quite a while since I added a new title to my Movies You Might Not Know list, but I’m making room for one today.

My daughter visited recently and wanted to watch an old movie with us. “Old” doesn’t mean the same thing to her as it does to my wife and me, so I suggested the 1985 John Huston classic, “Prizzi’s Honor.” She asked what it was about, and I started to reply, “Well, Jack Nicholson is a hit man….” Before I could go any further, she said, “I’m in!”

Nicholson plays Charley Partanna, beloved godson of Don Corrado Prizzi (William Hickey), head of a mob family in Brooklyn. The movie opens at a wedding that’s not quite as extravagant as the one in “The Godfather,” but a good location for Charley to spot a striking blonde woman (Kathleen Turner) among the attendees. Smitten at first sight, he tracks her down in Los Angeles and woos her, before discovering they have a lot more in common than he knew.

Meanwhile, Charley’s ex, Mae Rose Prizzi (Anjelica Huston), is trying to wedge her way back into the family after being shunned by her father (Lee Richardson). To do so, she offers some information about Irene to Don Corrado, and the plot keeps spinning to the point where Charley is confused about what to do next: “Do I ice her? Do I marry her? Which one of these?”

Forty-four years after making his directorial debut with “The Maltese Falcon,” John Huston still knew how to balance the drama with nice little bits of humor. He also got Nicholson to give one of his best performances, including a couple of scenes where he acts with his back to the camera, yet still projects the emotional wringer Charley goes through. Meanwhile, Turner was at the height of her powers, once again playing a deadly seductress with secrets and displaying an electric chemistry with her co-star.

The supporting cast is superb, too, from Anjelica Huston as a scorned woman seeking revenge, to Hickey as the gravel-voiced crime boss who can turn on the charm when necessary, to Robert Loggia as Prizzi’s other son, to John Randolph as Charley’s father.

For her performance as Mae Rose, Anjelica Huston won the Oscar for Best Supporting Actress, while “Prizzi’s Honor” was nominated for seven other Academy Awards, including Best Picture, Best Director, Best Adapted Screenplay (Richard Condon and Janet Roach, from his novel), and acting nods for Nicholson and Hickey.

Too often overlooked on lists of great mob movies, watching “Prizzi’s Honor” again made me remember how terrific it was. Thus, I’ve added it to my Movies You Might Not Know list.