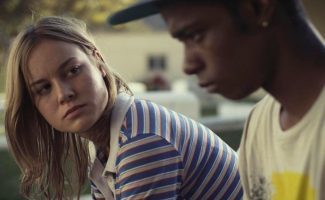 It stars Brie Larson — before she won an Oscar for “Room” and then became “Captain Marvel” — as Grace, a worker at a group home for at-risk kids. It’s the kind of place where doors have to be kept open so staff can keep an eye on teens who might cut themselves, where kids long abandoned to the system know their parents will never visit them, where life is limited to the people and place they inhabit.

Grace is only a few years older than the kids she supervises along with her live-in boyfriend Mason (John Gallagher Jr. from “The Newsroom” and “The Best Of Enemies”). They have a smooth rapport, both at home and on the job, where they’re breaking in Nate, a new hire played by Rami Malek. He serves as a conduit for us to understand how and why things are done a certain way at the home as he learns on the job.

Among the kids, Keith Stanfield (better known as Lakeith Stanfield in “Atlanta” and “Sorry To Bother You”) is a standout as Marcus, who is about to turn 18, has spent most of his life in the home, and is uncertain how he’ll get along once he’s released out into the real world. Kaitlyn Dever (Loretta Macready on “Justified”) is very good as Jayden, whose father has essentially dumped her there because he can’t handle single parenthood. And there’s Sammy (Alex Calloway), a boy who keeps trying to run away, but truly wants to be caught so he can get more attention from the staff.

Writer/director Destin Daniel Cretton created a tender world for his characters and their multi-layered relationships. The dialogue is cliche-free, the emotions are honest and often raw, and the situations ring true. He’s also very good at casting, with so many of his actors going on to great success just a few years later.

Larson is the real revelation, giving a nuanced, entirely believable performance as Grace, who calmly manages the crises of the resident kids even as the layers of her own circumstances are peeled away.