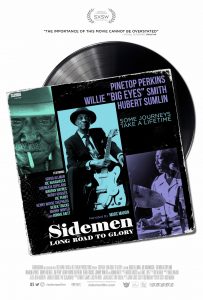 Over the years, I have written about movies like “Session Men,” “The Wrecking Crew,” “Standing In The Shadows Of Motown,” and “20 Feet From Stardom” — documentaries which told the stories of musicians whose names you didn’t know while they were working behind the stars and scenes. They’re all on my Movies You Might Not Know list, which gains another entry today.

“Sidemen: Long Road To Glory” (2016) is about piano player Pinetop Perkins, guitarist Hubert Sumlin, and drummer Willie “Big Eyes” Smith, who worked with two of the greatest names in the history of the blues, Muddy Waters and Howlin’ Wolf. All three sidemen died in 2011, but director Scott D. Rosenbaum got interviews with them before their deaths and heard stories about their lives on the road, backstage, and on stage with those seminal artists. Like Johnnie Johnson with Chuck Berry, these musicians weren’t just hired guns, but partners in the creation of Waters’ and Wolf’s songs.

Rosenbaum also got stars like Bonnie Raitt, Gregg Allman, Derek Trucks, Susan Tedeschi, Robby Krieger, Kenny Wayne Shepherd, and Johnny Winter to explain how great Perkins, Sumlin, and Smith were, how they helped revolutionize electric blues, and why they deserve a place in music history (and the Rock and Roll Hall of Fame).

While I knew the music of Muddy Waters and Howlin’ Wolf, I knew nothing about Perkins, Sumlin, and Smith. “Sidemen: Long Road To Glory” fills those gaps in my musical knowledge and pays homage to those under-appreciated artists.

The movie is now available for streaming on Kanopy (the free service from local libraries).