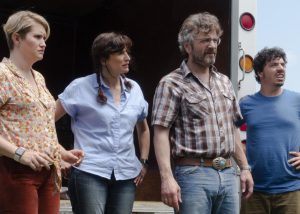 The newest addition to my “Movies You Might Not Know” list is Lynn Shelton’s “Sword Of Trust” from 2019.

Marc Maron stars as Mel, a world-weary pawn shop owner in Birmingham, Alabama, who not only has to put up with a stream of people trying to get a few bucks for their junk, but his assistant in the store, Nathaniel (Jon Bass), who spends more time watching conspiracy videos online than doing any work.

Into their lives come Cynthia (Jillian Bell) and Mary (Michaela Watkins). Cynthia’s grandfather just died, and she thought she would inherit his house, but all she ends up with is a sword and some paperwork claiming it’s from the Civil War. They take the items to Mel, along with a story about how the sword proves that the South won the Civil War. Mel sees right through this — until Nathaniel tell him that no, there are groups online that not only believe stories like this, but are willing to pay big bucks for artifacts that prove it.

Thus the foursome gets involved with some all-too-suspicious rednecks, who stuff them into the back of a carpet-paneled van to go off and see the boss of their little Confederacy-loving cabal. Along the way, we learn a bit more about how Mary and Cynthia met, as well as how Mel ended up owning a pawn shop. The latter comes in a several-minutes-long monologue by Maron that showcases his acting skills like nothing I’ve seen him do before. It’s a tour de force performance in a role created specifically for him by Shelton (who directed his two most recent stand-up specials for Netflix).

Bell and Watkins — so good together in last year’s “Brittany Runs A Marathon” (here’s my review) — have a wonderful chemistry, as do Maron and Bass, but it’s when the four of them are together that “Sword Of Trust” really sizzles. The actors largely improvised their dialogue based on an outline by Shelton and Mike O’Brien. Too often, “the actors improvised” is code language for trouble, but in this case, it’s a recipe for brilliance, as everyone pulls their weight and not only sustains the story, but drives it forward with low-key perfection.

That’s what makes “Sword Of Trust” work. After all, it’s a simple story with no action sequences, mostly shot in confined spaces on a limited budget. It didn’t get a big release — I don’t think it ever made it to theaters here in St. Louis — but it’s well worth tracking down and watching.