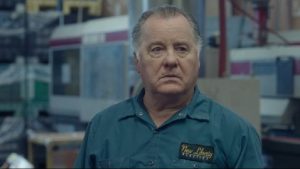 My wife and I have liked character actor Peter Gerety since we first saw him in “Homicide: Life On The Street” more than a quarter-century ago. Since then, we’ve enjoyed him in “The Wire,” “Charlie Wilson’s War,” “Sneaky Pete,” “Inside Man,” and so many other TV shows and movies.

Last year, Gerety starred in “Working Man,” a small movie that didn’t get much distribution. In it, he plays Allery Parkes, a man who has worked at the New Liberty Plastics factory near Chicago for his entire adult life. When the plant is closed down, he loses a sense of who he is and how to fill his days. So, Allery wakes up the next day, packs his lunch box and thermos, and goes to the factory. Finding the front gate chained, he goes around the back, jimmies a door open, and goes to his work station. Discovering the factory’s power has been turned off, he commences cleaning the machine he’s worked with for so long. And when that’s done, he cleans the next one, and the one after that.

Allery’s wife, Iola, doesn’t understand what her husband’s up to. Neither do his neighbors, who also worked at the plant. After a sheriff finds Allery inside the closed building and takes him home, Walter, who lives across the street, offers to take him back the next day and let him in with the master keys he never returned. Once there, Walter works the phones and gets the electricity turned back on. Then he goes through some paperwork and discovers there are several projects that were left unfinished for clients. Walter contacts them, then tells Allery the customers will pay them to complete the work, so the two men get to work fulfilling them. Soon, word spreads to their former colleagues, who also show up and start doing their old jobs.

This brings attention from corporate headquarters and “Working Man” looks like it’s heading in a “Norma Rae” direction, but the script by director Robert Jury reveals a dimension to the story that gives it a sudden twist, upending our expectations.

Gerety is marvelous as Allery, a man of few words, whose life experience is discernible by the look on his face and the way he shuffles instead of walks. Even in the quiet moments, Gerety portrays him as a man with dignity, but no life other than his job. Talia Shire plays Iola, his wife, who struggles to support and protect her husband even as she’s unsure what he needs. Bill Brown plays Walter with a stealthy power, a man who’s at first endearing and honorable but clearly troubled by his past.

“Working Man” is a story that could be told in hundreds of American communities that have been torn apart by the departure of manufacturing, disappearing jobs, and economic strife. Jury’s film recognizes the struggle of the lost labor force and offers Gerety a leading role he fits perfectly.

I give “Working Man” an 8 out of 10 and have added it to my Movies You Might Not Know list.

Now available on the Showtime networks and via video on demand.