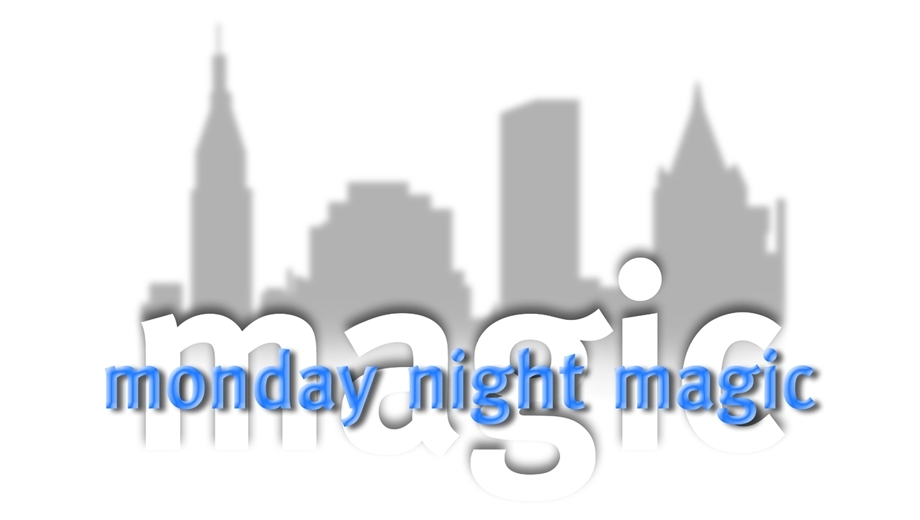 During my week in Manhattan, I went to see Monday Night Magic, which was founded by Michael Chaut and my friend Jamy Ian Swiss 18 years ago. With different performers each week, it is the longest-running magic show in New York. The night I was there, emcee Harrison Greenbaum kept things moving with some nice tricks and some really funny, quick-witted, ad-libbed interplay with audience members. David Corsaro opened the show with a tight ten minutes, and Michael Chaut closed it with a 45-minute display of mentalism that was truly stunning. He had great rapport with the audience, too, and used more than a dozen of them to assist with his tricks.

The middle performer was The Great Throwdini, a master of the “Impalement Arts,” who owns 40 world records for knife-throwing (not to mention axes and hatchets). He put on quite a display of his skills with the help of assistant/target Lana, who stood against a wooden backdrop while he threw various implements very close to her body. It’s not a job for anyone with a twitch. Technically, his act doesn’t qualify as “magic,” but it’s still a lot of fun to watch.

At one point, TGT had Lana bring up a man from the audience and stand him against the board while holding up his arms as if to show off his muscles. Then Lana placed a balloon in the crook of each arm and one more between his legs. As she did this, TGT put a black sack over his head and grabbed some knives before saying, “Nah, better you than me,” and putting the sack over the head of the “volunteer” instead.

The guy was visibly trembling as TGT said “here we go,” but what he didn’t know was that the knives were being tossed harmlessly into the wood about a foot away from his body — while Lana popped each balloon manually with a small knife. For the last one, the balloon between the legs, TGT instructed Lana to move it up all the way into the victim’s crotch, eliciting a loud, “WHAT???” from the still-blindfolded guy. Then, with one last “pop,” TGT pulled off the black sack and the guy virtually ran off the stage, happy to be out of danger — and hopefully laughing it off when his friends told him what had really happened — as the crowd erupted in applause.

I’ve been to Monday Night Magic twice and enjoyed it both times. If you’re in New York, with or without children, get some tickets in advance, and try to get close to the sleight-of-hand magicians who perform during intermission. MNM is at The Players Theatre, right next to the Comedy Cellar in Greenwich Village.