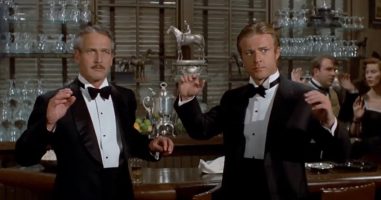 As an addendum to my review of “Focus” yesterday, here’s my list of the nine best-ever con man movies. Note that these don’t include heist movies, or movies that include a small con as part of a larger plot.

1)  “The Sting.” The standard by which all other con man movies must be measured. Not only does the plot involve multiple cons (sequentially and simultaneously), but it has a great villain in Doyle Lonnegan (Robert Shaw), who Henry Gondorff (Paul Newman) and Johnny Hooker (Robert Redford) want to take down as revenge for killing their grifter friend Luther Coleman (Robert Earl Jones). They’re all perfect, as is George Roy Hill’s direction, Marvin Hamlisch’s score, and what a supporting cast: Jack Kehoe, Charles During, Eileen Brennan, Ray Walston, Harold Gould, and Dana Elcar.

2) “House Of Games.” David Mamet’s first directorial outfit, from his own screenplay and a story by Jonathan Katz, is a look inside the world of con men as they pull off a long con on Lindsay Crouse’s uptight psychiatrist. Joe Mantegna leads the pack, wrapping his tongue around that unique Mamet word rhythm, supported by pros Ricky Jay, Mike Nussbaum, and JT Walsh. Like a great con game, Mamet gives you just enough information to think you know what’s what without actually giving anything away.

3) “Paper Moon.” Ryan O’Neal plays a grifter during the Depression who cons people out of the few dollars they have with a bible-selling scheme. His real-life daughter Tatum plays the 10-year-old daughter of a dead woman O’Neal once knew, so he agrees to drive the girl across the midwest to her extended family in St. Joseph, Missouri. Along the way, he discovers that she has a natural knack for helping him pull off his con, and he teaches her a few more along the way. With Madeline Kahn as a stripper who he picks up at a state fair, in a very funny performance.

4) “Confidence.” Edward Burns plays the leader of a group of grifters who cross paths with Dustin Hoffman as a bad guy with ADD and a helluva temper. Hoffman kills one of Burns’ men when they steal his money, and now they have to figure out a way to get back at him while pretending to pull something off on his behalf. With Paul Giamatti, Rachel Weisz, Andy Garcia, Donal Logue, and Luis Guzman.

5) “Matchstick Men.” Forget about your image of Nicolas Cage from every other movie he’s done. In “Matchstick Men,” he’s great as a career con man with a serious case of obsessive-compulsive disorder who works with partner Sam Rockwell and long-lost daughter Alison Lohman to pull off a big foreign-exchange con. The personal side and the professional side build together to a very satisfying climax.

6) “Catch Me If You Can.” Based on the life story of Frank Abagnale, who flew around the world in the 1960s pretending to be a Pan Am pilot while cashing bogus checks in city after city. When he got bored of that, he passed himself off as a doctor and a lawyer — all while still a teenager. Abagnale is played by Leonardo DiCaprio, his father is Christopher Walken, the FBI agent chasing him is Tom Hanks, there are supporting roles by Amy Adams, Jennifer Garner, and Martin Sheen, and crisp direction by Steven Spielberg.

7) “Criminal.” John C. Reilly is a con man going after a big score by trying to swindle a currency collector with a forgery of an extremely rare bill. Along the way, he picks up Diego Luna and teaches him some of the tricks of the trade, while trying to stave off his sister, played by Maggie Gyllenhaal. “Criminal” (based on “Nine Queens,” a Spanish movie made four years earlier) is Reilly’s best work.

8) “American Hustle.” Christian Bale is a con man who falls for Amy Adams, and the two pull off some big-money fake loans until FBI guy Bradley Cooper busts them and forces them to help him set up some corrupt politicians. Stylishly directed by David O. Russell, with very solid performances by the three leads and a supporting cast that includes Jennifer Lawrence, Jeremy Renner, and Louis CK.

9) “The Grifters.” John Cusack plays a small-time grifter who learned about the business from his mother, played by Angelica Huston, but finds himself caught up in a power struggle between her and his girlfriend, Annette Bening — and they’re both playing for bigger stakes. As always, there’s a terrific supporting cast including Pat Hingle, JT Walsh, and Jeremy Piven.