Not Your Average Elevator

I took this photo a few days ago at the Hotel Wilshire in Los Angeles. At first glance, this looks like your average, everyday, elevator panel, right? 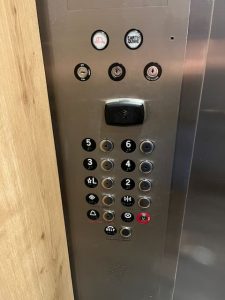 But if you look a little more closely, you’ll see this in the top row: 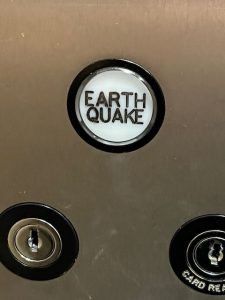 I assume that’s a light that comes on if the building starts shaking, and not a button wired into the tectonic plates of the San Andreas Fault. But I didn’t dare touch it to find out.

Actually, I asked the clerk at the front desk about it. He told me that when there’s a big enough tremor, the light goes on, the doors automatically open at the next floor, and the elevator stays there until reset.

Since the hotel is so close to Hollywood, its owners should also have installed the “Sensurround” effect created for the 1974 disaster movie, “Earthquake.” 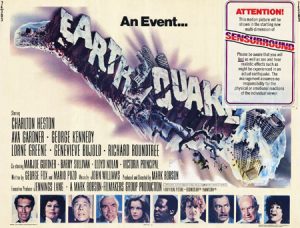 The screenplay was by Mario Puzo (fresh from both “Godfather” movies) and George Fox (whoever he was). It was directed by Mark Robson, who had also made “Valley Of The Dolls,” “Peyton Place,” and the underrated World War II prison escape movie, “Von Ryan’s Express.” Plus music by John Williams.

“Sensurround” is described on Wikipedia as “adding extended-range bass for sound effects. The low-frequency sounds were more felt than heard, providing a vivid complement to onscreen depictions of earth tremors, bomber formations, and amusement park rides.”

I saw “Earthquake” in its first run in a theater equipped with “Sensurround” and remember it not feeling so much like the place was shaking, but more like everyone’s stomach had started rumbling simultaneously. Or maybe that was just the downright cheesiness of the movie.