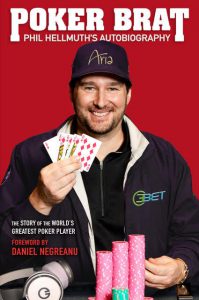 Phil Hellmuth is probably the most famous poker player in the world. He holds the record for the most championship bracelets at the World Series Of Poker (14, including the Main Event in 1989 and the Main Event of the WSOP Europe in 2012) as well as the most final tables and the most cashes. He’s won over $21 million in poker tournaments and was inducted into the Poker Hall Of Fame in 2007. He’s a regular on Poker Night In America and ESPN’s coverage of the WSOP Main Event. Now he’s written his autobiography, “Poker Brat.”

Among the questions I asked during our conversation: