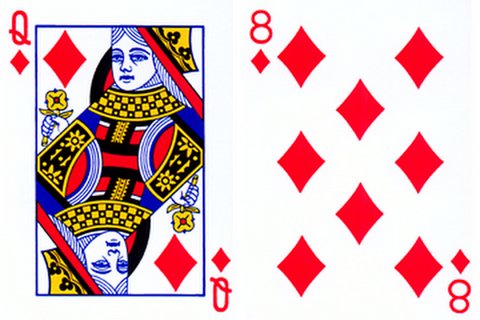 I’ve met many poker players who will always put chips into a pot with a certain hand. I’m not talking about pocket aces or kings, but some odd combination of cards that they’ve decided is their “favorite hand.” It means something to them because they won a tournament with it, or it’s their birthday, or whatever. For the record, my favorite hand is whatever cards I was holding when I won and the dealer pushed me the pot. That is to say I have no such superstitions.

But if you’re in a game with me in St. Louis, and you see me win a hand with queen-eight, don’t be surprised. Like every other hold’em player in this town, I know that queen-eight is not a good starting hand, but you’ll see it played more often than it should be, and when it wins, someone will always say, “Can’t beat The Buffalo!”

That combination of cards has a legend behind it, but no one is sure of all the details. If you Google it, you won’t find an explanation. Here’s as much as I know:

More than a quarter-century ago, Don told his wife he was going out to get some milk. Instead, he got on a bus and went to Las Vegas, where he stayed for a few years, supporting himself by playing poker at various casinos around town. It was at the Mirage that he encountered a guy from Buffalo, New York, who wasn’t very good, but seemed to enjoy the hell out of himself, even as he poured money into the game. That guy’s favorite hand was queen-eight, and whenever he won with it, he would loudly proclaim, “Can’t beat The Buffalo!”

The story then fast-forwards to the day Don found himself broke. He was not the first (or last) poker player to go bust, but he decided he’d had enough of Las Vegas and wanted to go home. He had money for a bus ticket, with enough left over to buy some food or a pack of cigarettes. Don chose the cigarettes and quietly endured the long ride home. I don’t know what happened when he encountered his wife after all that time. Part of me wishes she looked up and asked, “Where’s the milk?”

Several years later, I met Don in a $20/40 limit hold’em game in St. Louis. He was a good player who usually won, and he was a pleasure to be around because he always had stories to tell. During one session, he took the pot with queen-eight, smiled, and said, “Can’t beat The Buffalo!” No one knew what he was talking about, so he told us all the back-story.

Since then, The Buffalo has been played far more often than it should be, and its legend has been handed down from veteran players to newcomers. Eventually, some of them play it and say it. Part of the tradition is that, when you win with it, you must show your cards and reveal The Buffalo. Of course, we’ve also had people try to pull off big bluffs with queen-eight that backfired — but they showed The Buffalo anyway. It has become part of the social fabric of poker in St. Louis, where most of the seats are filled by locals who are competing for chips, of course, but also trying to have a good time with people they’ve known for years.

A few weeks ago, in a five-way pot in our $5/10 no-limit hold’em game, the flop came queen-queen-eight. Mike, a talented young player, immediately said, “This would be a good time to have The Buffalo!” We all laughed, and then watched the pot grow quite large between Mike and another player. His opponent had ace-queen, but Mike had The Buffalo and pulled in the pot.

Only in St. Louis.

We’ve even taken the tradition further. If the flop comes out queen-eight-five, we call that The Buffalo Nickel. In several sessions, I’ve had a prop bet with my friend John — I win if The Buffalo Nickel comes up, he wins if Dr. Pepper comes up (ten-two-four, because on old bottles of that soda, there was a clock with the hands pointing to those hours, indicating when you should drink it). John is also the one who said, with a smile, “The Buffalo is a great hand that always wins if you play it right. But it always loses if you play it wrong.”

There have been times when I’ve been in a game elsewhere, looked down at queen-eight, chuckled to myself, and folded my hand. It’s no fun to play if no one knows the history. But earlier this year in a $5/10 game at The Bellagio, I had queen-eight in the big blind in a limped pot, and the flop was jack-ten-nine, giving me a straight. After I bet and everyone folded, I had to restrain myself from turning over my cards and telling the table, “Can’t beat The Buffalo!”

I knew no one would understand, and I didn’t want to have to explain, so I kept The Buffalo to myself as I quietly collected the pot.