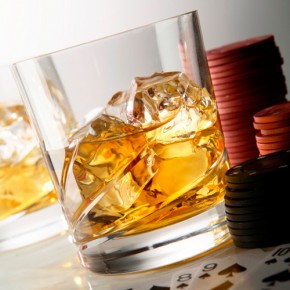 Another in my series of occasional poker stories…

Charlie (not his real name) was a former World Series Of Poker Main Event champion who had a reputation for drinking a little too much, which led him to playing very loosely. So it wasn’t a surprise when he walked into the poker room with a rack of chips in one hand and a drink in the other. I knew him, having interviewed him several times, and when he recognized me, he came over to ask what I was playing. I told him it was a $5/10 pot-limit Omaha game that had just started short-handed about an hour ago. He loves PLO, so he sat down immediately.

It took exactly one hand for his wild side to come out. He raised every hand of every street and took down a decent-sized pot — and for the next half-hour, he kept it up, potting and re-potting, losing some, winning more, until he had increased his stack from $3,000 to $15,000. It wasn’t really poker, with decisions being made on every street. Charlie and several of the others who got involved in hands with him were just “spinning the wheel,” jamming their money in and seeing who got hit by the deck.

I’d been doing well before Charlie arrived, up a couple thousand, and didn’t want to lose it in some stupid hand where luck was the only factor in determining outcome. So I pulled back and waited for a good opportunity. To give you an example of how out-of-control he made it: we were six-handed, all straddling the button for $25, and in one hand, the bet was $4,000 before it even got back to me on the button.

I looked down at my cards: 7-4-3-2, all different suits. I had a feeling that these were live cards, but it was a terrible hand for PLO (I’d have loved it if were playing Badugi), and I knew that if I called the $4,000, the next guy would just re-raise and I’d have to commit the rest of my stack to a hand I shouldn’t have played in the first place. I folded and watched as three of them got all their chips in the middle. If I’d stayed in, I would have won with a wheel (A-2-3-4-5). Instead, Charlie took it down with one pair, kings.

By this time, word of his presence had reached several other pros in the casino (I know of at least one guy who was roused out of the shower in his hotel room by a fellow pro to come down and get in on this action). It was all they could do to keep from drooling as they sat down to fill up the table.

But Charlie wasn’t happy. He didn’t want to play in a “full ring.” He wanted to keep the game six-handed and raise the stakes to $10/25/50. The floor supervisor said she couldn’t change the game at this table, but agreed to open a new table for him, and five of the pros practically fell over each other grabbing empty seats around him there.

With Charlie gone, my table calmed down, other players joined the game, and things returned to normal. I lost a little, then won a few, and finished with a profitable session. Unfortunately, Charlie didn’t. He kept slamming down drinks and raising every pot — a bad combination in the long run.

Actually, the run wasn’t that long. It took an hour. That’s when I watched Charlie get up from the other table, still with a glass in his hand, but with no chips in the other. He had blown through the $15,000 and was done. He stumbled to an elevator to go to his hotel room and, no doubt, pass out.

I wonder if he even remembered it all the next day.