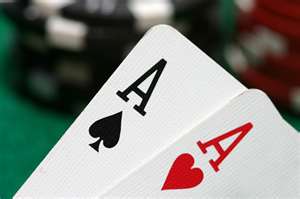 Another in my continuing series of poker stories…


The other day, I wrote about the time I folded a pair of aces pre-flop in a tournament. A friend reminded me it wasn’t the only time I did that.

Two years ago, when the Heartland Poker Tour rolled into St. Louis, I played in a mega-satellite for the main event. A mega-satellite is a lower-priced tournament that allows you to qualify for the higher-priced tournament by outlasting 90% of the people who have entered — everyone in the final 10% gets an entry ticket to the main event, regardless of how many chips you have at the time.

In this instance, there were 150 people in the mega, so seats in the main event would be awarded to 15 people. I had been doing well and had a decent-sized stack when we got down to two tables (20 players). At that point, everyone was trying to avoid a mistake that would eliminate them before qualifying — especially the players with the shortest stacks. But one by one, they were eliminated, until we had 16 remaining at two tables of eight each.

There was a player at the other table whose chip stack was so small, and the blinds and antes so large, that he would be all-in within the next couple of hands unless he caught decent cards and doubled (or tripled) up. Meanwhile, everyone else was avoiding any action, because they didn’t need to accrue chips — they just had to hold on and wait.

It only took a minute or so for that short stack at the other table to move all-in and be called by the chip leader. Simultaneously, at our table, our own short stack moved all-in, and was called by our chip leader. That’s when I looked down and saw two aces.

Normally, I’d be in a hurry to get my chips in the middle under those circumstances, but this was different, so I took a few seconds to think. I didn’t need to win another hand to get to the qualifying finish line — there was no bonus for having a bigger stack. It seemed unlikely that the short stacks at both tables would win their hands, and as soon as one of them lost, the tournament would be over.

Since I was the big blind, and thus the last to act, I said out loud, “Here’s something you don’t see very often.” Then I exposed my aces face-up and added, “I fold.” Everyone at the table laughed, as they understood the dynamic.

Sure enough, the shortest stack lost and busted out on the tournament bubble. Like the other 14 people who had outlasted the field, I took my entry ticket for the next day’s main event and went home to get some sleep.