Poker Stories: The Woman Behind The Man 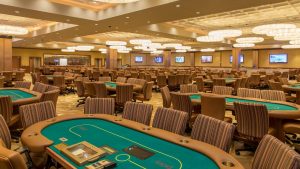 Another in my occasional series of poker stories…

Preston comes over to a table where I’m playing, says hello, and sits down in the empty seat. His girlfriend, Missy, also says hello as she pulls up another chair — not to play in the game, but to sit behind Preston as he plays. Over the next two hours, they don’t talk much to each other, although they occasionally order a drink. Mostly, Missy watches as Preston loses. It’s not the first time I’ve seen them do this, but I’ve never understood why.

A few years ago, I was playing at Bellagio in Las Vegas. The poker room is near a nightclub called The Bank, where large numbers of under-forty-year-olds line up to get in, drink, dance, and party all night. It was late, about 3am, when a couple in their 20s walked between the tables towards a $2/5 no-limit hold’em game. He sat down, she sat behind him. They were immediately noticeable, because they were both very good-looking — the kind of attractive that turns heads in both genders, and they’d caught the attention of our entire section of the room, particularly because the woman was wearing a dress that didn’t leave much to the imagination. It was obvious from their sheen that they had gotten sweaty in the nightclub, and now he’d convinced her to let him play some cards before they went to bed.

It took about a minute for two guys at my table, adjacent to the one where the handsome couple was seated, to start questioning his decision. One of them asked, “Once you’ve gotten all worked up in The Bank, why would you not go directly upstairs to the room and get down to business?” A completely valid question, I thought (as I tried not to seem too obvious but continued to stare). Yet a better question would be, “Why would she agree to come in here and just sit there, doing nothing?”

I’m always amazed when I see a woman sitting quietly behind her man as he plays poker. In all the years I’ve frequented poker rooms, I have never seen a man sitting behind a female poker player — nor, for that matter, a gay/lesbian partner doing the same.

I can’t think of any circumstance under which my wife would take a seat behind me at any point during a poker session. She has no problem with me playing, but doesn’t care about gambling at all. In our nearly 32 years together, she has gambled exactly once — because I made her.

We were on our first trip to the Caribbean, on the island of St. Maarten. We’d spent the day on the beach, had a nice dinner, and it was still early, so we walked around the property. After a little while, we came upon the hotel’s tiny little casino. It had about two dozen slot machines, two blackjack tables, and a roulette wheel. No poker, no craps.

I sat down at a blackjack seat and put $25 on the table. It only took about three hands before I got the tap on the shoulder — not from casino security, but from my wife, asking, “Can we go?” I had won those first three hands and wanted to play for a little while. She didn’t want to go back to the room by herself, so I handed her a $20 bill, pointed to the roulette table and said, “How about if you go over there, pick a number, bet a dollar on each roll, and see what happens?” She frowned, but took the cash and said, “Okay, I’m going to bet on 22 every time and lose our nest egg!”

That’s one of the reasons I love her — the woman can ad lib an Albert Brooks “Lost In America” reference.

I continued playing, knowing it would take about 20 minutes for her to run through the twenty bucks, but kept glancing over to see how she was doing. Apparently, the little ball was not dropping into the 22 slot. She kept losing, while I won a little, lost a little, nothing big either way. Then I heard her say, “Okay, this is my last chance!” as she placed her final chip on the table — followed moments later by an ear-to-ear grin. She’d won!

The croupier pushed 36 chips to her (roulette pays 35-1 on a single number). She tried to scoop them up and cash them out, but a supervisor told her she couldn’t do that. If she wanted to exchange the chips for dollars, they’d do it right there at the table. She did, and came skipping over to me, still smiling, holding those four bills (a twenty, ten, five, and one) so tightly that, the next morning, they were still stuck together on the dresser in our room.

I asked her if she’d enjoyed herself, knowing that this is how some people get hooked on gambling. If you win the first time, you think it’s easy, so you keep going back. Some people who win keep playing because they figure they’re “playing with the house’s money.” That’s a horrible lapse in logic, since once they push those chips over the line, they belong to you, not the casino. Fortunately, my wife doesn’t think like that.

She answered my question by explaining that, while winning on the last spin made her happy, she hadn’t enjoyed the rest of it, didn’t like the atmosphere, and had no interest in ever being in a casino again. And she hasn’t. My wife is among the very few people in the world who have gambled exactly once, walked away with a few extra bucks, and never returned.

Which is why you’ll never see her sitting behind me in a poker room.