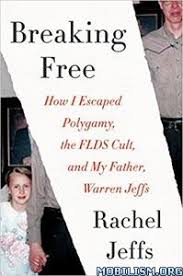 You may remember hearing about FLDS, a cult of fundamentalist Mormons in Arizona and Utah led by Warren Jeffs, the group’s self-proclaimed prophet, who has 78 wives and 53 children and still controls them from his cell in a federal prison, where he’s serving a sentence of life plus 20 years. Almost all of his followers keep quiet about what he’s done, but not Rachel Jeffs, one of his daughters, who left the church in 2015, moved to Idaho, and has written about her life in “Breaking Free: How I Escaped Polygamy, the FLDS Cult, and My Father, Warren Jeffs.”

This was a tough interview, not only because Rachel tends to give short answers, but also because the subject matter makes the hair on my neck stand up — and worse. Still, I was curious about her reactions when I asked about the rules her father insisted on, what the punishment was for breaking them, and what her childhood was like. Then we dug into how he sexually abused her beginning when she was eight years old (!), what happened when she confronted him in a letter at age 16, and how she was forced into a polygamous marriage at 18. We discussed how he continues to control the family from behind bars, whether she’s in touch with any other family members, and why she doesn’t consider herself a victim or want sympathy. She also revealed how she’s heard from women and men who have gone through similar experiences.