Now that Donald Trump has a 2-year renewal for The Apprentice, is there anyone left who believes he was really thinking about running for President?

Here’s a question no one’s asking: when 33,000 troops — particularly reservists — come home from Afghanistan in this economy, what are they going to do for jobs? With so many of them having served for so many years, their employers are likely to have filled their positions, eliminated them, or possibly gone out of business. This could get ugly.

The tech blog rumor mill says Apple will release the iPhone 5 by the end of the summer. I won’t be lining up for it, but can I reserve one now?

Jon Stewart is more than “just a comedian” — he’s an activist, fighting for the cause of reason, says Will Bunch. I agree.

An official at Wimbledon says that grunting by some of the female players has gotten out of control (the legacy of Monica Seles). He’s probably talking about these noisy women.

Today’s lesson from the Knuckleheads In The News® file: if you get caught shoplifting a coat, you’ll have trouble pleading not guilty if you wear that same coat to court.

Also from Knuckleheads In The News®: who was using a toothpick in the operating room?

And finally, US Airways is being accused of a racial double standard because one of its pilots kicked a black college football player off a flight in San Francisco because he wouldn’t pull up his saggy baggies — but a week earlier, the crew of another US Airways flight let they had no problem with letting this white guy on board. How would you like to have him squeeze into the middle seat next to you in this outfit? 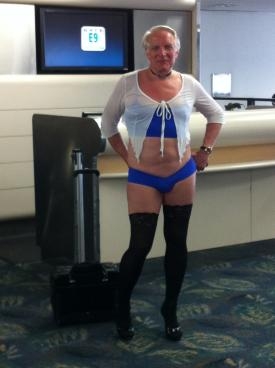