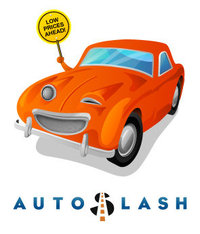 Here’s a recommendation for a money-saving service, with the disclaimer that I have no connection to the company and don’t get any kickbacks from them — I just like the way they do business.

The company is AutoSlash, which helps you book car rentals and then monitors the rates of the company you’re renting from. If they drop below your original price, the website re-books your reservation at the lower rate.  And the cost for this is….zero.  Not a penny for the original booking, or any subsequent automatic re-bookings.

I used
AutoSlash to book a car for my upcoming Las Vegas trip for the World Series Of Poker.  AutoSlash told me which company had the lowest rates — which I confirmed by checking the websites of various rental agencies and other low-price search engines — and then, a few hours after I booked a car through AutoSlash, they sent me an e-mail saying they’d found a better price and had locked me in at that rate ($6 lower).  Three days later, I got another e-mail saying they’d found an even better price ($8 less) and reserved the same car with the same company at that rate.  This morning, they sent me another e-mail telling me they’d re-booked it for me yet again at a rate that will save me $40 on my week-long rental.

Apparently, car rental companies adjust rates all the time based on demand, and since there’s no penalty for cancelling a reservation (or even for not showing up to pick up the car!), consumers are free to play the find-the-best-price game.  In the past, I’d make the reservation weeks or months ahead of time, then check the options again a few days before my trip and, occasionally, save a few dollars by re-booking.  Now I don’t have to do that, because AutoSlash does it for me.

So it’s a free service that does nothing but save me money without taking an extra second of my time.  What’s the downside?

The biggest car rental companies (Avis, Hertz, Enterprise, National, Alamo, Dollar, Thrifty) have stopped working with AutoSlash because it was costing them money (the companies pay AutoSlash a commission on each reservation, but end up collecting less because AutoSlash uses coupon and discount codes to find you better prices).  That limits your choice to companies like Payless, Fox, and EZ, but since there’s no difference in the cars they offer, what difference does it make which agency you rent from?  I’ve used these smaller companies several times and never had a bad experience.  The car is always clean, gassed up, and ready to go when I arrive — which is all I want.

It’s possible that the industry may squeeze AutoSlash out of the business with those limited options, which would be a shame.  Until they do, I recommend you give them a try.  Those dollars you save will pay for some of the gas you’ll have to put back in the tank at the end of your rental.