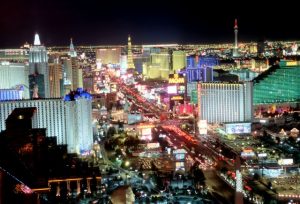 My brother-in-law, Stuart, and I had a tradition that went on for more than two decades — an annual trip to Las Vegas for a weekend of poker, betting on NFL games, and good meals. That streak was broken last year because of the pandemic, but we were itching to start anew, and did so this weekend.

Unfortunately, I failed to realize that the World Series Of Poker — which I haven’t paid any attention to for the last five or six years — would still be in progress. We didn’t stay at the Rio or plan to go near it, but the massive influx of players from around the globe meant that the waiting lists in all the other poker rooms were overflowing. Still, we managed to get in quite a few hours of play at Bellagio, Encore, and Resorts World.

The latter is a new venue that sits on the site of the former Stardust, across from our favorite diner, The Peppermill, where we always stop in for a meal. Resorts World still has its new casino smell and look, with a huge food court full of street food stands, most targeted towards Asian gamblers. There’s also a high-end mall, and a huge gaming space that includes a beautiful poker room with really comfortable chairs, good space between tables, and — best of all — a lot fewer young pros than at other venues.

It seems like the crowds in Vegas are back to pre-COVID levels, both at the properties and on the sidewalks. Masks are required inside all the casinos, with staff handing them out for free, but there’s no serious enforcement. While I’m happy to report the vast majority of visitors wear theirs over both noses and mouths, but there is a sizable number of customers and employees with the mask permanently pulled all the way down, making it nothing but a chin bra.

There are also quite a few in masks that are completely useless because they barely go from the tips of the nose to the bottom of the lips, so whenever the wearer speaks, it slips and offers no protection. Don’t even get me started on the dozens I spotted wearing not masks, but plastic face shields, which are open at the bottom and sides, and thus only effective against a virus, germ, or other aerosol particulate attacking from directly in front. So dumb.

While I’m triple-vaxxed and feel no need to be masked, I still wear one indoors, particularly in crowded conditions, unless I’m eating or drinking. But having one on for most of the day is taxing on the ears because of the pull of the elastic loops. I feel for all the people in service jobs who must put up with that uncomfortable feeling all day or night.

My other problem with face masks is due to the Bellagio’s digital key, which allows you to use an app on your phone to unlock your hotel room door. But because my iPhone’s Face ID technology doesn’t recognize me through the mask, I always have to enter my passcode manually, which becomes a timing issue when you also have to use the digital key to get the elevators to take you to your floor. I stood there fumbling for several seconds on more than one occasion trying to get the app to do its thing. I eventually was so frustrated I went to the front desk and had a standard key card made. Since it requires no code or app, that choice made my life just a little bit easier.

I have two other stories from this weekend to share with you. One was at the very beginning, waiting to board the Southwest flight at STL Aiport. A woman got in line next to me, then noticed a friend a few people ahead of us, and shouted, “Oh, hey, where are you going?” I wish Bill Engvall had been there so he could give her a sign.

The other took place in the Bellagio poker room. It was packed and, as usual, there weren’t enough cocktail waitresses working. I happened to be playing at a table they all have to pass on their way to and from the service bar. I was thirsty, so I tried to get the attention of one of them, but she ignored me. The dealer told me this wasn’t her table. Okay. I tried again with the next waitress, and the next, and the next, but none even paused long enough to acknowledge that someone had spoken.

Finally, a half-hour later, I got up and went across the sports book to the bar and ordered a bottle of water, which the bartender brought immediately. Not long after I got back, a new player at my table also tried to order a drink, but was repeatedly rebuffed until one of the waitresses stopped long enough to say, “This isn’t my table, but someone will take care of you soon,” and walked away. That’s when I chimed in: “That was a lie. No one will be with you. Ever.”

You might think this could be chalked up to a short-staff situation lingering from the pandemic or the so-called Great Resignation. But having gone to Vegas for decades and played at the Bellagio many, many times, I’m here to tell you this was an issue in that poker room long before anyone had ever heard of COVID.

Nonetheless, Stuart and I had a great weekend, which included a trip about an hour north of The Strip so I could show him The Valley Of Fire, a state park with unique geological formations that are stunningly beautiful. We’re thrilled to have re-started our tradition, which we hope continues annually henceforth.