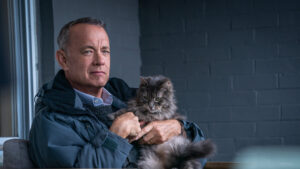 Otto is a gruff guy who doesn’t suffer fools gladly. You park on his gated street, he writes down your license number. Your dog urinates on your lawn, he finds and scolds you. You want to make him pay for six feet of rope in a hardware store when he only wants five, he wants to talk to your manager.

In that scene, we’re supposed to think the hardware store is ripping him off by forcing him to buy more than he needs. But if it sold batteries in four packs and he only need two, would he be right to argue with the cashier? Have you ever tried to buy just one cup of milk at a grocery store? Sorry, the smallest size they sell is a half-gallon. If you order a slab of ribs at 54th Street Grill, the server will ask you which two sides you want. Even if you only want fries and no second choice, you’re going to be charged the same amount. Deal with it.

Even with that hard exterior, it will turn out Otto has a heart of gold and is capable of being nice. In between, nothing will happen that you don’t see coming. Thank you for watching the Hallmark Channel.

Otto’s world is full of representation. There’s the black couple a few doors down with the husband in a wheelchair. There’s the trans guy delivering papers on a bicycle. There’s a work-from-home goofy white guy who’s always outside in a track suit. There’s the biracial family with cute kids that just moved in across the street. There’s a woman who calls herself a social media journalist. And there’s a feral cat Otto is constantly shooing away — right up the moment he takes it in and cares for it.

He seemingly doesn’t want anything to do with any of them, but of course, he ends up helping or getting help from all of them, despite his barely hidden disgust and constant eye-rolling. The studio could have released “A Man Called Otto” in December and promoted it as a new version of the Grinch story.

How did Otto get this way? Don’t worry, we have plenty of flashbacks to when the younger Otto (played by Tom’s son, Truman Hanks) met and wooed his wife — in the kind of relationship that would cause any rational observer to ask, “What did she see in him?” We’re led to believe that her death, six months ago, was what sent Otto into a depression, which manifests as anger, misanthropy, and suicide attempts.

There are elements of “A Man Called Otto” that might have been better if they’d been played for laughs, but director Mark Forster and screenwriter David Magee smoothed out too many of Otto’s rough edges, turning what could have been a comedy into a bland, formulaic story of redemption.

There’s a clear parallel between “A Man Called Otto” and Clint Eastwood’s “Gran Torino,” right down to the immigrants who soften up the grumpy old men. But Eastwood spent his career playing guys who barely put up with the world. Hanks, on the other hand, has a career-long reputation as a nice guy. Trying to turn the latter into the former is the biggest obstacle “Otto” has to overcome, and it falls way short.

I’m giving “A Man Called Otto” a 3 out of 10. My wife saw the 2015 Swedish movie it was based on, “A Man Called Ove” — and read the Fredrik Backman book both were adapted from — and recommends those instead.