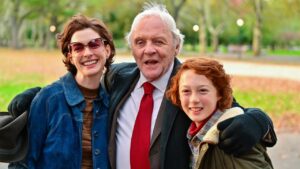 In Barry Levinson’s 1990 family drama, “Avalon,” the patriarch of a Jewish family is played by Armin Mueller-Stahl, an actor born in Eastern Europe who personified the role.

In James Gray’s 2022 family drama, ”Armageddon Time,” the patriarch of a Jewish family is played by Anthony Hopkins, an actor born in Western Europe who doesn’t personify the role in any way.

Don’t get me wrong. Hopkins remains one of our finest actors, and continues to do strong work in his eighties, but his casting in this movie was a huge error. It’s akin to Neil Simon allowing Gene Saks to hire Blythe Danner as Jonathan Silverman’s mother in “Brighton Beach Memoirs” (not to mention Judith Ivey as his aunt!).

Hopkins doesn’t even bother covering up his iconic Welsh accent. While his character supposedly grew up in Liverpool, England, he doesn’t sound one iota like fellow octogenarian Liverpudlians Paul McCartney and Ringo Starr.

”Armageddon Time” is the coming-of-age story of Paul (Banks Repeta), who lives in Queens, New York, with his hand-wringing, PTA president mother (Anne Hathaway) and father (Jeremy Strong), a plumber with a temper problem. Paul tends to trigger his father’s anger easily by being a discipline problem at school, skipping out in the middle of a field trip to the Guggenheim Museum, or getting caught smoking a joint.

In all of those endeavors, Paul is joined by his friend, Johnny, the only Black kid in the class, who’s a frequent target of not-so-subtle racist remarks and overreactions by their teacher. This is Johnny’s second go-round at sixth grade, for reasons never explained. The two are viewed as troublemakers by every adult they encounter, but they’re really just a couple of average, mischievous, 12-year-old boys.

Nonetheless, Paul is yanked out of the public school and sent off to the private academy his brother attends. On his first day in the world of mandatory blue blazers and ties, he meets a gruff older man in the hallway, who we later learn is a benefactor of the institution named Fred Trump (John Diehl). Yes, Donald’s father.

This is the point at which I was pulled out of the fictional story and found my mind wandering to the evils that family has imposed on our country — for decades. Those feelings were heightened by the appearance later of Fred’s daughter, Maryanne, played by an uncredited Jessica Chastain. By including them in his movie, Gray pulls focus from Paul and Johnny, and I don’t think he ever got it back.

Watching “Armageddon Time,” I was sympathetic towards Paul, despite finding little to like about him. The film is semi-autobiographical, in that Gray grew up in that era in Queens, but he has filled the movie with stereotypes galore. He also wasted Tovah Feldshuh, who plays Paul’s grandmother, by giving her far too little to do opposite Hopkins and around the family dinner table. Gray, who also wrote the screenplay, makes it too obvious where the third act will go, yet still offers no real resolution to Paul’s story — and abandons Johnny halfway through, too.