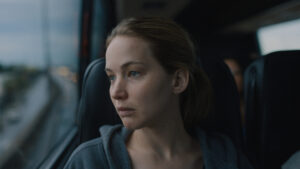 After a string of so-so projects (“Passengers,” “Don’t Look Up”) and outright mistakes (“Red Sparrow,” “mother!”), it’s good to see Jennifer Lawrence back on screen in a movie worthy of her talents.

In “Causeway,” she plays Lynsey, a soldier returning home after a traumatic brain injury suffered in an IED attack in Afghanistan. It is Lawrence’s most low-key performance, as she holds back the manic energy of her earlier successes (“Hunger Games,” “American Hustle,” “Silver Linings Playbook”) to play a woman who feels lost and painfully sad.

Lynsey wants to redeploy, but she has a lot of healing to do first, so she moves back to her childhood home with her mother, Gloria (Linda Emond, fresh from playing Domnhall Gleeson’s mother on the outstanding FX limited series, “The Patient”). Theirs is a difficult relationship, as mom has issues of her own and doesn’t provide much of a safety net other than food and shelter.

Lynsey wants to return to war because it’s where she felt purpose, but can’t explain that to the neurologist (Stephen McKinley Henderson) who’s hesitant to sign the waiver she needs. He can’t imagine anyone’s desire to return to the circumstances that scrambled her brains and nearly ended her life.

While running some errands, Lynsey’s pickup truck starts sputtering and blowing steam. She manages to get it to a small repair shop run by James (Brian Tyree Henry from “Atlanta,” “If Beale Street Could Talk,” “Widows”), a mechanic who has suffered some physical trauma of his own. The two bond, and that’s the first time we sense any warmth in the story (other than the heat and humidity in New Orleans).

From there, nothing much happens except the two damaged people develop a friendship, empathize and sympathize with each other, and reveal the traumas they must recover from. In her feature film debut, director Lila Neugebauer does a masterful job matching the color palette to the mood while trusting her cast to express the frazzled frustration of their situations.

As she did in “Winter’s Bone” (the movie that put her on the map), Lawrence perfectly reflects Lynsey’s internal pain, and Henry matches her beat for beat. “Causeway” contains no car chases, no comedic interludes, no moment where everything suddenly turns better. But it works as the story of two wounded people who find a way to fight through the gloom.

Opens in theaters and streaming on Apple TV+ today.