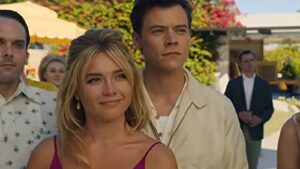 Because I haven’t seen any of her previous films (e.g. “Midsommar,” “Black Widow”), I wasn’t familiar with the actress Florence Pugh. But based solely on her performance in “Don’t Worry Darling,” she is a major talent who owns every scene she’s in with a radiance that positively jumps off the screen. She gives off the same vibe Meg Ryan and Scarlett Johansson did towards the beginnings of their careers.

In “Don’t Worry Darling,” Pugh plays Alice, a 1950s housewife whose entire suburban life revolves around her husband, Jack (Harry Styles). He works at the headquarters of a company called Victory, leaving at the same time every morning as the other men in their cul-de-sac, who depart in a neat line as their loving wives stand in their driveways, wave goodbye, then go inside to clean the houses. When Jack returns home, Alice is there at the front door with a drink for him and the dinner she’s prepared.

I’ll pause in describing the plot to mention the production design by Katie Byron, full of sharp angles and vibrant colors which make the neighborhood stand out from the stark surrounding desert.

The first hour of “Don’t Worry Darling” had me thinking this was some remake of “The Stepford Wives,” and I had no idea where it was going as Alice gets an inkling that things in her world aren’t what they appear to be. From there, the movie turns into a combination of “Pleasantville,” “One Flew Over The Cuckoo’s Nest,” and an episode of “Black Mirror.” But that’s all I’ll tell you, because to reveal more would be to spoil the fun.

Olivia Wilde, who hit a home run in her directorial debut, “Booksmart,” has nearly done it again with “Don’t Worry Darling.” This time, she’s not just behind the camera, but also in front of it as one of Alice’s closest friends. I say “nearly” because the movie doesn’t quite tie the bow on the developments in its last act, but the rest is a visual feast, and I can’t stop thinking about it. I like that Wilde didn’t feel the need to give us all the answers, because it’s been quite some time since I debated the questions unanswered by a film’s closing scenes with fellow moviegoers.

I don’t like to see movies with any prior knowledge of what to expect or the noise created in tabloids and social media, so I was unaware that there’s some buzz about Wilde and her cast — and frankly, I don’t care. Much of it, I’m told, centers on Styles, who became a teenage heartthrob during his time in the boy band One Direction and is now trying to launch a movie career. The problem with Harry is that he isn’t nearly as good an actor as Pugh, a fact easily discernible in the many scenes he shares with her in “Don’t Worry Darling.” Styles is the single member of the cast who looks like he’s trying to act, and it comes off as unnatural.

Meanwhile, Chris Pine gives a powerful performance as the unctuous leader of the Victory community. It’s one of the best things I’ve seen him do. Wilde also gets good work out of her supporting cast, including KiKi Layne, Nick Kroll, and Gemma Chan. Additional kudos to Carey and Shane Van Dyke, as well as Katie Silberman (who also worked on “Booksmart”) for concocting such a clever screenplay.

One last thing about Wilde. She not only has a sure hand as a director, but also brings a strong female perspective to a movie that is, at its heart, about Alice and the other wives. Part of that is reflected in one scene where Jack comes home, is greeted at the door by Alice, and they almost immediately begin to grope each other and end up pushing the plates off the dinner table to make love. But unlike in most on-screen sex scenes — particularly those directed by men — this one isn’t just a couple humping away in the missionary position. Instead, Wilde makes it about the husband pleasuring the wife. The result is a steamy sequence that sends us a message about their relationship, without pushing beyond an R rating.

Other than Styles’ sub-par performance and the not-entirely-satisfying finale, I enjoyed “Don’t Worry Darling” enough to give it an 8.5 out of 10, which at this point means it’ll likely have a spot on my Best Movies Of 2022 list at the end of the year.

It is quite a sophomore effort for Wilde, who — in my book — is now two for two as a director. I look forward to seeing what she does next. As for Florence Pugh, she has a hell of a career ahead of her if she chooses her projects wisely. Even when she doesn’t (it happens to even great actors), she’ll be someone worth watching.