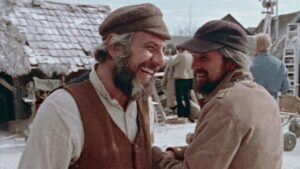 A couple of years ago, I gave “Fiddler: Miracle of Miracles” a ten out of ten and named it the best documentary of the year. Now, there’s another doc about the classic musical I’ve loved since I was young.

This one, “Fiddler’s Journey To The Big Screen,” focuses on the 1971 movie version of the mega-hit Broadway show, “Fiddler On The Roof.” Documentarian Daniel Raim uses lots of footage of Norman Jewison, who directed the film, to explain how he executed his vision. One of the highlights is Jewison recalling how he told studio executives that, despite his name, he is not Jewish, so why would they want him overseeing a movie about the travails of a religious Jewish man and his family in Russia in the early 20th century?

Raim also gathered many of the movie’s cast, including leading man Topol, who had played the role on stage in the London production. He talks about how he minimized his performance to translate from stage from screen. Rosalind Harris, Michele Marsh, and Neva Small — who played Tevye’s three oldest daughters — share anecdotes about their experiences, and how moved they were when they sang some of their featured songs (e.g. “Far From The Home I Love”).

But Raim also got some of those behind the scenes, including production designer Robert Boyle, who had worked on such varied projects as “Private Benjamin,” “The Shootist,” and “Staying Alive,” as well as three Hitchcock movies (“North By Northwest,” “The Birds,” and “Marnie”). He and Jewison reveal how and where they built the fictional town of Anatevka and used the gray sky and ground as continual mood-setters for the story, while using the artist Marc Chagall’s painting of a fiddler as inspiration.

Also appearing in the doc are lyricist Sheldon Harnick and composer John Williams, who explains how he wrote the opening piece the fiddler plays and how he convinced legendary violinist Isaac Stern to perform it.

The critic Kenneth Turan makes an interesting point I hadn’t considered: the movie version of “Fiddler On The Roof” was not a launching pad for anyone who appeared on camera. But even for those who didn’t go on to hugely successful careers, they all look back on the experience with pride and affection.

As I’ve written before, “Fiddler” is so deeply embedded in my heart that any exploration of it — on stage or screen — can’t help but bring a smile to my face. “Fiddler’s Journey To The Big Screen” did just that, and is a perfect companion piece to “Fiddler: Miracle Of Miracles.”

Now streaming on Paramount+ and available on DVD and video on demand.